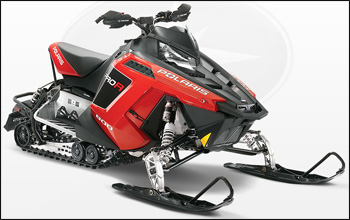 With the success of the new-last-year RUSH still written bold in the headlines, Polaris has raised the stakes and released information on its newest performance sled, the 2011 RUSH Pro-R.

With dozens of upgrades, the 2011 RUSH continues to evolve and the biggest news is the addition of the much anticipated Cleanfire 800 engine to the platform this year. RUSH 800 models feature a 7lb lighter exhaust canister and a 2-injector system rather than the common 4-injector layout.

First, here’s some of the technical details on the new RUSH Pro-R chassis. The engineers have pared 2.5 lbs. of rotating mass out of jackshaft and drive area. A new cooler has been added at the rear to augment the unique front cooler on all RUSH models. This improvement facilitates better cooling for the demands of the physically larger 800 engine but it’s used on both the 600 and 800 Pro-R.

Walker Evans Needle shocks with 16-position compression clickers and remote reservoirs are used on the Pro-R and a 15×120-inch track with 1.25-inch lugs is specific to this new model.

There’s a new rail profile on the RUSH for 2011 to increase top speed and the skid’s front torque arm has been modified to allow more stud clearance. A quick glance at the back of the sled reveals significant differences to the RUSH’s rear geometry and body trim.

The Rush combines its unique structural bonding process to marry chassis components to its cast bulkhead and the result is a lighter, stiffer chassis (actually 300 percent stiffer than other Polaris models).

Supertrax has found the RUSH to be a flatter cornering sled than the IQ with an extremely lightweight persona. Handling is precise and predictable and there’s very little ski-lift or darting as you ply trails with it.