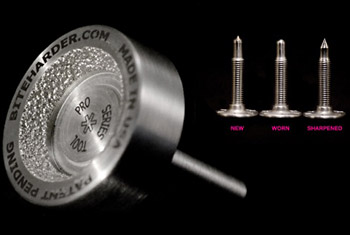 Less than three years after Welch Manufacturing Technologies announced the release of the snowmobile industries first diamond coated carbide runner sharpening tool, owner Glenn Welch and the team at BITEHARDER have done it again with the release of their newest product, the BITEHARDER Carbide Stud Sharpening Tool.

Building on the incredible success of their carbide runner sharpening tools, the patent pending BITEHARDER stud sharpener is a simple and effective way to sharpen your studs without the need to remove them from your track.

“The stud sharpener is one of our Professional Series Tools,” says Welch, “meaning it needs to run in a pneumatic style die grinder at speeds of 10,000 RPM or greater to obtain the best results.” Welch continues noting a Standard Series Portable version is in the works.

As with their other tools, industrial diamonds on the inside face of the tool are used to perform the sharpening process. CNC machined from the highest quality steels to precise tolerances the BITEHARDER Carbide Stud Sharpening Tool also provides a universal shank for mounting to any high speed pneumatic grinder. The BITEHARDER brand is leading, yet again, with another MADE IN THE USA tool for the Snowmobile Industry enthusiasts to embrace.

The tool is designed to sharpen the carbide stud without changing the overall height of the worn stud. Each tool is rated to sharpen 500 or more studs and takes only about 15 seconds of grinding per stud to bring back a sharp tip, allowing you to sharpen all the studs on your track in under an hour.

For the 2014/2015 snowmobile season, the BITEHARDER Stud Sharpening Tool will only be available directly from BITEHARDER and retails for $149.95.