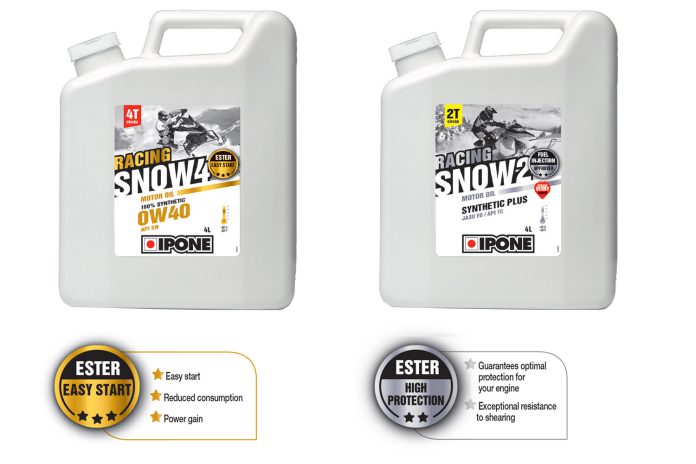 IPONE has been around since 1985 and not only produces Group 5 ester-based synthetic oil, but is also dedicated to the powersports market.

Ester-based oils are made from 100-percent synthetic chemical compounds, free of any petroleum base.

The chemical reaction of colliding organic and alcohol-based atoms forms a complex molecule with less carbon atoms and is also free of the wax (paraffin) commonly found in other petroleum-based oils.

Synthetics are free of petroleum waxes and the solvents normally needed in other oils to break down the waxes for a lower pour point in cold weather.

The problem with solvents is that they eventually burn off, so you may start with a 0W40 oil, but eventually it will turn into a 5W30 or worse.

Another problem is an oil that breaks down quickly is also consumed quickly, meaning more top-ups and more dollars out of your pocket.

If you own a 4-stroke snowmobile you know how frustrating it can sometimes be starting it in cold weather. Since ester-based oils are attracted to metal surfaces, IPONE literally coats and sticks to engine components like cylinder walls and piston skirts, resulting in less friction on start up and less dependence on the oil pump delivering the oil.

IPONE oil is low viscosity and contains additives resistant to breakdown over time. The result is significantly reduced friction and heat build-up in the engine, which means an engine that’s working more efficiently and putting more power to the crank.

IPONE’s synthetic ester-based racing oils are offered in 0W40 4T Stroke oil blend which is good down to -45°C/-65,2°F and a 2T Stroke injection oil recognized on the trail by its distinguished strawberry scent.

Learn more and find out where to buy IPONE oils at ipone.fr

Supertrax Onlinehttps://new.supertraxmag.com
Check back frequently for new content and follow us on social media!
Previous articleLOW COST OF SNOWMOBILING
Next articleIS E-TEC REALLY THAT FAR AHEAD?