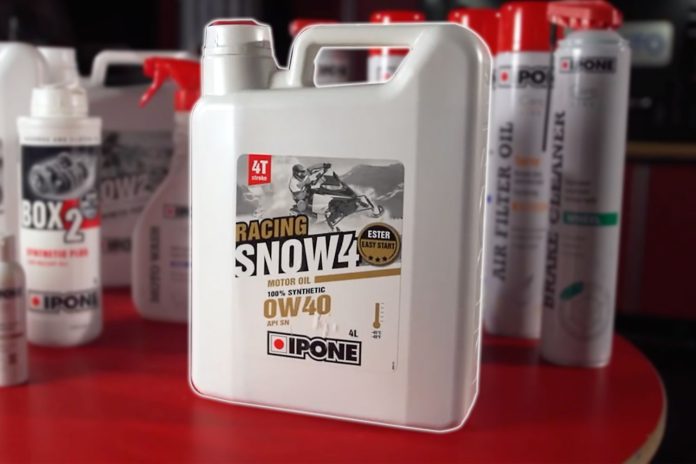 Since 1985, IPONE has been manufacturing high-performance oils and lubricants for the powersports industry.

IPONE’s SNOWRACING 4 OW40 is an ester-based oil which means this 4-stroke lubricant is in the purest and cleanest-burning category and the oil is chemically synthesized from organic acids and alcohol elements.

Ester-based oils are superior to petroleum-based oils. Petroleum-based oils have a natural wax in its DNA and require solvents to be added in order to break down the wax so the viscosity is consistent at lower temperatures. If you didn’t have the solvents, the wax would build up over time in the engine.

An attribute of high-quality oil is its low viscosity. IPONE oil is not only low viscosity but it has additives that resist breakdown over time. The result is significantly reduced friction and heat build-up in the engine – in other words, an engine that is working more efficiently and putting more power to the crank.

If you own a 4-stroke snowmobile you know how frustrating it can sometimes be starting it in cold weather. Since ester-based oils are attracted to metal surfaces, IPONE literally coats and sticks to engine components like cylinder walls and piston skirts resulting in less friction on start up and less dependence on the oil pump delivering the oil.