UNDER-ACHIEVERS FROM THE PAST: BOLENS DIABLO ROUGE 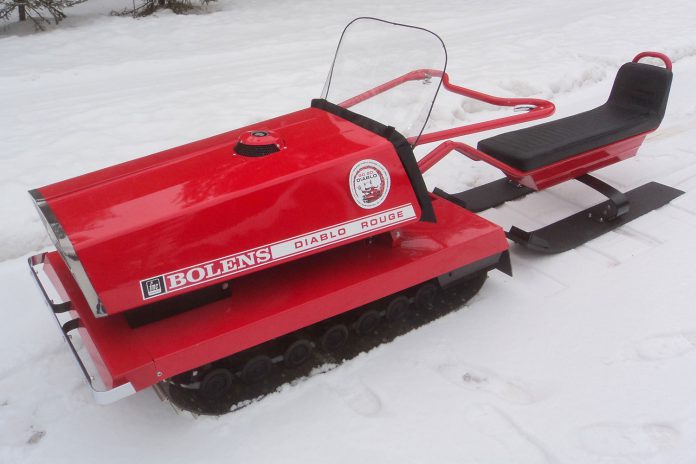 Here’s an example of how thinking outside the box can sometimes get you into trouble. Bolens, a lawn and garden giant, wanted to get into the snowmobile business in the early 1960s but wanted to create a distinctive market identity. Nothing wrong with that kind of thinking and at the time snowmobile design was all over the place, anyway.

Someone suggested: “Why not move the driver and drivetrain into two separate halves, with the driver seated on skis on a separate unit behind the engine, transmission and track with the whole thing articulating in front of the rider.” It’s almost impossible to describe in words how that idea was supposed to work, but from the photograph here you can get the idea.

Bolens executed the idea quite well, building a reliable, reasonably well-finished product, but the concept just fell off the rails once people started buying them.

One big problem was the fact riders had a distinct possibility of needing dental work soon after the Diablo Rouge was driven over a trail undulation that arched upwards in the middle of the articulation between the two halves of the snowmobile, raising the handlebars into the air.

In many cases the hoop handlebar unexpectedly came up under the rider’s chinstrap (no one used full-faced helmets back then) and removed their front teeth.

Surprisingly, the Diablo Rouge really performed well traversing snow, hardly ever got stuck and was actually really good as a utility hauler. This was the problem. It was just good enough the company kept building them.

Supertrax Onlinehttps://www.supertraxmag.com
Check back frequently for new content and follow us on social media!
Previous articlePOLARIS 4-STROKE PREDICTIONS
Next articleUNDER-ACHIEVERS FROM THE PAST: SKI-DOO STRATOS