UNDER-ACHIEVERS FROM THE PAST: SKI-DOO STRATOS 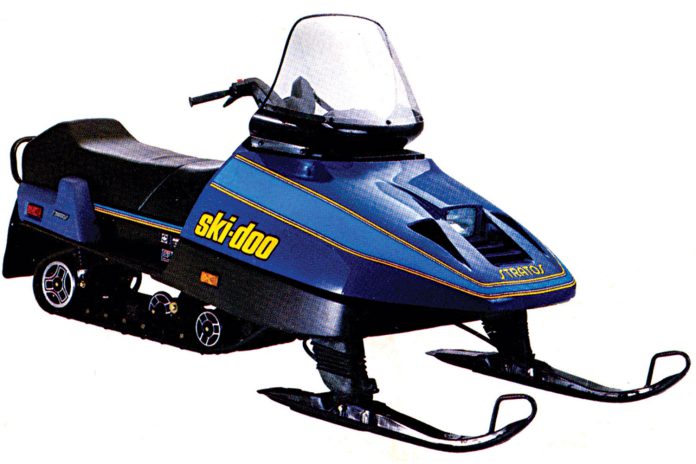 Probably Ski-Doo would just like to forget about the Stratos.

Here was a snowmobile so ugly and awkward-looking it defied description. Was it lightweight? No. Was it a performer? No. Did it fit the market in its time? Nope. Was it pretty? Definitely not!

What it was, was built as solid as a battleship – just as reliable – and almost as heavy.

Back sometime in the late 1980s Supertrax toured the Ski-Doo plant in Valcourt, Quebec and watched in awe as extremely high grade parts were precision formed using robotics and CNC technology to make… unbelievably… parts and components for the Stratos. We couldn’t believe it!

We suspect the Stratos was an idea someone came up with that seemed really good at the time and as production and planning ramped up for it, there was no way to turn back.

To be fair, the Stratos was almost impossible to destroy. It was so overbuilt and underpowered (it used a 500cc fan-cooled Rotax), you just couldn’t hurt the thing – and we suspect many who bought one really wanted to do just that.

The Stratos chassis spawned a similar 2-up model called the Escapade. It too was equally unpretty but just as rock-solid. Years ago, we took an Escapade with us on a tour in Quebec and our Polaris and Yamaha press sleds were stolen. The thieves walked right past the “Eska-Pod” and left it alone. No wonder!

You still see these sleds here and there – because like a bad penny, they just won’t go away!