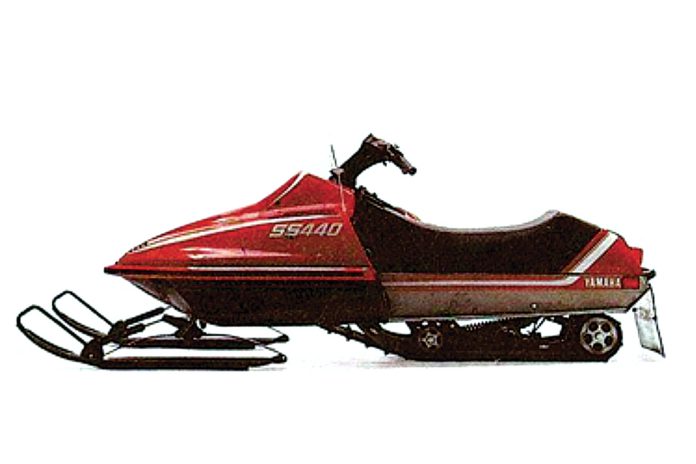 Here’s another failure to meet expectations set by a multi-jillion-dollar ad campaign. In 1980 Yamaha had the sno-mo-world by the tail.

The Yamaha name was synonymous with innovation, reliability, unequaled fit and finish but maybe not so much with performance. The venerable Exciter and Enticer series sleds were the meat of the company’s product line and the Exciter 440 with its 48-hp fan-cooled, single carb 440 twin was the trail sled to own.

In 1980 Yamaha wanted to leap-frog the competition with the intro of the SS440, an all-new sled powered by an axial fan-cooled 440 twin producing an unremarkable 50-hp – only two more ponies than the EX440 it was destined to replace.

In similar fashion to the ’89 Mach 1 dilemma, the SS440 sold like ice cream at a July parade – before the snow landed. Once in the hands of a legion of new buyers the SS 440 couldn’t keep the old-school EX440 in sight. Screams of foul from the faithful who bought into the marketing hype could be heard all the way to Hammamatsu.

The problem – almost unbelievably – was the track’s angle of attack and the actual motion of the skidframe tightening the rather heavy-ply track as it moved through the skid’s travel. What is still the most involved and had-to-be most expensive in-season recall in the history of the sport was launched in January of 1980.

The fix included a completely new skidframe made with aluminum extrusions, a new front drive axle and a new track. The time required to do the fix was hefty and dealers reluctantly obliged, but the work was so involved they lost money doing the recall on every SS they sold.

So, here we go again – the SS 440 was a slick piece of snowmobile engineering and design that, in the beginning, couldn’t live up to its marketing hype.

Supertrax Onlinehttps://new.supertraxmag.com
Check back frequently for new content and follow us on social media!
Previous article2020 Backcountry XRS 850 vs 2020 Switchback Assault 800
Next articleUNDER-ACHIEVERS FROM THE PAST: 1978 KAWASAKI INVADER