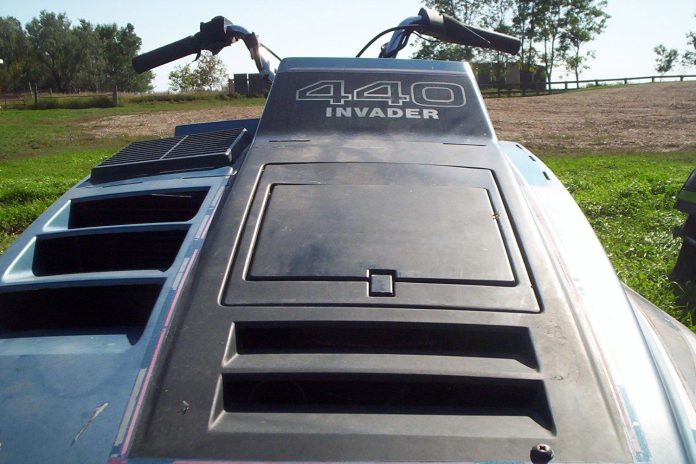 Yes, Kawasaki was in the sno-mo-biz – beyond supplying engines for Arctic Cat.

The company set the market on end in 1978 when it introduced what was arguably the best looking production snowmobile ever built (up to that point).

The Invader was just drop-dead sexy with a dramatic wedge shape and beautiful Japanese fit and finish. The metallic blue and silver matched-die-molded hood and belly were pleasing to the eye from every angle.

It’s no secret the Invader’s bold and beautiful shape impacted the soon-to-be-released Yamaha SS440 and the 1981 SRX 440. Under the hood were beautiful Kawasaki-built 340 and 440 liquid cooled, reed valve inducted twin-cylinder masterpieces.

The engine employed a never-seen-before mounting system that held the engine from the sides, allowing the entire powerplant to be radically lowered deep into the sled’s belly.

Advertising hype included line drawings indicating the top of the cylinder head was actually below the top of the seat. So innovative was the Invader the competition had to take notice and were rightfully concerned this new-OEM might be one-upping the establishment.

Despite what would become known as an effective and reliable drive clutch and what appeared to be a low friction involute drive track and shallow angle-of-attack skidframe, the Invader never delivered on the promise its looks boldly proclaimed.

When push came to shove and the new Kwacker headed down the lake for a full pull, the flagship 440’s performance couldn’t match the Invader’s undeniable good looks.

Almost four years later the Interceptor 550 arrived on the scene and Kawasaki got some revenge. That sled was fast, crazy fast in its day. Unfortunately, Kawasaki had already had enough of the sno-mo-biz and the accountants made it pack its tent after the 1982 model year.