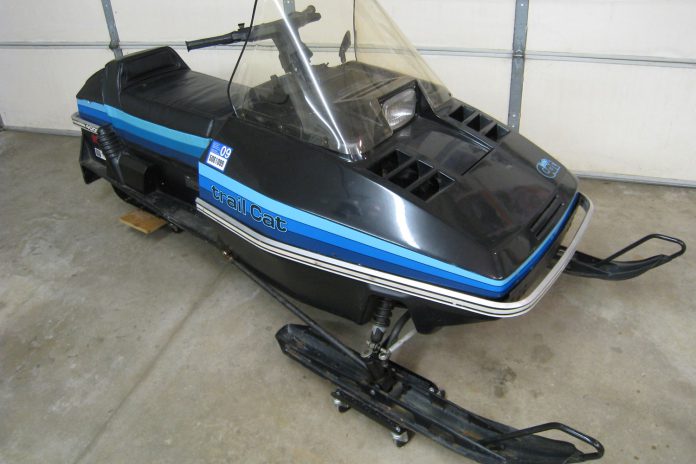 By 1979, because Polaris had nailed the market with the intro of the IFS Indy, the competition had become fully aware independent front suspension was the wave of the future.

There was no going back – but Polaris had such a jump on the market with its technology, it was going to take some time for the other sled-makers to catch up with IFS tech of their own.

Arctic Cat, always keenly aware of what was going on sixty miles down the road, knew it needed to meet customer expectations with an IFS sled of its own. Furthermore, what if Cat’s sled took things a notch further and offered long travel suspension?

There were hints of something new and exciting going on in Thief River Falls and in late 1978, the revolutionary Trail Cat was revealed. Its fresh bodywork had a completely new look, towering over the Indy – and was maybe even a bit longer.

Its deep, plush seat hinted at rider comfort and its skidframe with dual external shocks, hung out below the running boards like a Blizzard 5500 MX – not a sled you would want to imitate.

As soon as availability was announced, one of our staff ordered one, took delivery, rode it twenty miles and immediately put it up for sale.

He told us “his mother could swim faster than that sled” – and although it rode pretty good, it’s single radius rod IFS had more bump steer than a steak house.

Plagued by track noise (it used a cleated metal grauser track) and requiring such huge amounts of track deflection he felt the thing was going to derail at any second.

A lot of tech guys and barnyard mechanics attempted to make the Trail Cat perform and handle, but its weight, unstable IFS design and anemic power just never delivered to the level the market thought it should.