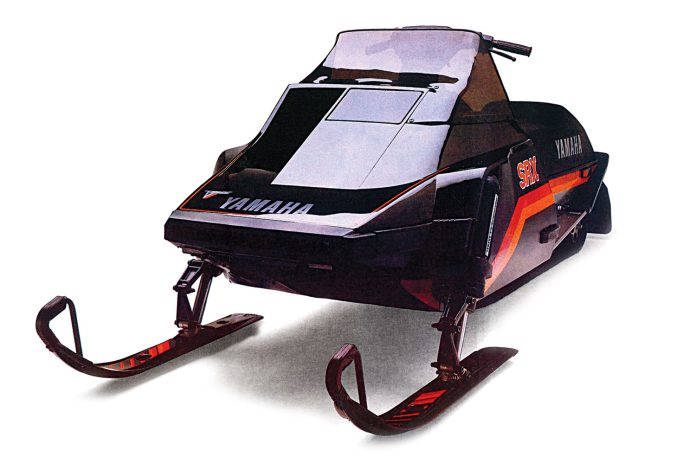 On a scale rivalling the legend of the Bermuda Triangle sits the mystery of the 1982 Yamaha SRX 500.

In what has to be the only event of its kind in snowmobile history, this gorgeous snowmobile was mass produced but never allowed to be taken home by a group of purchasers and dealers who had ordered up heavy early-season. Folklore has it the entire production run of these beauties was sent to an anonymous Midwest wrecking yard to be crushed. Say it isn’t so!

To explain what actually happened here would be risky. Why? The stories surrounding the SRX 500 are myriad and we suspect Yamaha has not had much to do with any of them.

Imagine building and marketing a new top-of-the-market snowmobile to find out there was something so critically wrong with it the factory decided to pull it from the shelf and make it disappear. We suspect Yamaha really wasn’t interested in explaining what happened. It was obvious – it was something really bad.

Rumors abound of post delivery crankshaft problems, primary clutch explosions, seizures and the list goes on. For what it’s worth, we think what might have been the reason for the SRX 500’s disappearance was underachievement.

It’s possible, after dismal performance from the 1981 440 SRX and the bold promise the new 500 engine and clutches being the fix, the company elected to cut bait and shelve the SRX name – to be resurrected sometime in the company’s sno-mo-future.

It’s no secret the SRX moniker was ultimately dusted off and legitimately and successfully rejuvenated in the late 90’s through today.

Supertrax Onlinehttps://www.supertraxmag.com
Check back frequently for new content and follow us on social media!
Previous articleSNOWTRAX TV 2020 – Episode 4 Sneak Peek
Next articleUNDER-ACHIEVERS FROM THE PAST: LENKO LARVEN