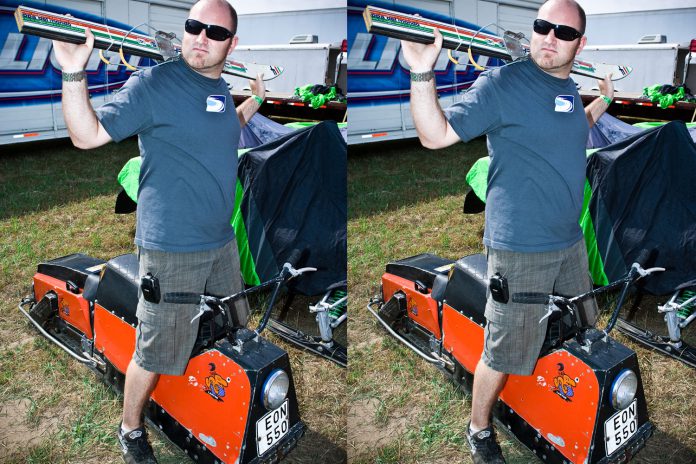 The Larven snowmobile (“caterpillar”) in Swedish, was built in Ostersund, Sweden sometime in the 1960s through to the end of the 70s. It was the brainchild of Lennart Nilsson.

His concept was pretty bizarre from the beginning but actually had a really loyal following in Europe. The idea was to build a separate power and drive system from where the rider was perched and mount it at the rear so it articulated vertically, separate from the front “pod” where the rider sat. The handlebars were stationary and moved neither left nor right. The track ran the full length of the structure. Hmm.

Hold on, the best is yet to come. The steering mechanism consisted of a pair of skis attached to the rider’s feet! You steered by leaning and it was only possible because the Larven was so light (it only weighed about 150-lbs.).

You can imagine the kind of liability issues you’d have building a Larven today. Think about riders driving over their own skis or – landing a jump and getting the skis crossed up! There are just an unlimited number of scenarios that could end up badly.

Here’s the biggest surprise: Remember we mentioned at the beginning of this series how some owners would still swear these listed snowmobiles were their best ever? Somehow, Lenko sold over 4,500 Larven snowmobiles!

That’s a lot of broken ankles!

Supertrax Onlinehttps://www.supertraxmag.com
Check back frequently for new content and follow us on social media!
Previous articleUNDER-ACHIEVERS FROM THE PAST: YAMAHA SRX 500
Next articleFull Review: 2020 Ski Doo Renegade X rs 850