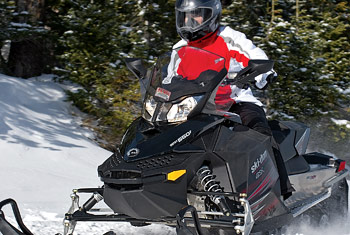 You won’t hear a lot about the GSX Sport but it’s one of Ski-Doo’s drop-dead best deals. The GSX designation means it’s a versatile sled with multiple uses.

Primarily, it’s a trail sled but because of its XP roots, it’s an amazingly good trail sled. It handles like it’s on rails, is incredibly light and has enough advanced design and technology to keep the competition at bay for the next decade.

Why doesn’t Ski-Doo stand on the rooftops and proclaim this sled for all its worth? Dunno, but we think it has something to do with CAFE – Corporate Average Fuel Economy. This is the average fuel economy allowed by the EPA of the total of all snowmobile models a manufacturer retails in a given year. The idea is to keep sales numbers of stingy models high and numbers of guzzlers sold, lower.

Since the liquid cooled 597cc version of the GSX Sport uses a rather unsophisticated engine (compared to today’s high tech offerings), a carbureted, vacuum operated exhaust valve, cylinder reed 2-stroke, its mileage pales in comparison to the amazingly efficient 600 E-TEC 2-stroke Ski-Doo offers in more spendy versions of the GSX.

The Sport’s 600 does not produce the tight-fisted fuel economy of an E-TEC nor does it make equivalent horsepower. It does, however, cost a bushel of dollars less. If you really want to shave the price, you can go for a similarly equipped GSX Sport powered by a vigorous Rotax 550 fan-cooled 2-stroke ($8,099.00).

We think the 600 Sport is such a good deal we’re going to focus on it in this article. Riding the GSX, as mentioned, you’d swear it was an MX-Z. It has very sharp turn-in with feather-light steering input, it’s Motion Control gas cell shocks lean to the soft side but offer nice plushness at sensible trail speeds.

Throttle response is linear and predictable and its 40mm carb calibration is almost totally transparent. That is, even when cold it doesn’t surge and pop from irregular fuel mixture and its start and idle behavior is completely user-friendly.

Here’s a bonus: This sled is fast. We sampled an MX-Z with the same engine last year and were pleased to discover its 110 hp output was plenty. You won’t be making apologies for holding up your friends riding bigger displacement sleds.

It’s truly about power-to-weight and what the GSX sport lacks in power, it makes up for in lightness. The end result is surprising performance.

The Sport comes with trail friendly essentials like RER reverse and, best of all, electric start. Surprisingly, the package also includes a 1-inch deep Camoplast RipSaw track – definitely an upgrade for a sled in this price range.

There’s even a set of mirrors, a heated power outlet and an adequate analog gauge package with a tach included. The point is this is not a cheesy, downgraded, cheapo sled. Five years ago this snowmobile would have represented the ultimate equipment load for a one-up cruiser snowmobile.

We’ve often said: the best thing about buying any XP-based sled is that you’re getting the technology of tomorrow, today.

Priced right, the GSX Sport is a very advanced piece of equipment and its built-in features, like a faceted chassis and ounce reducing all-aluminum design are benefits that filter down from the top of the product line to the bottom. The Sport is located somewhere in the middle, but as a second sled, is one everyone in the family will love.

Supertrax Onlinehttps://www.supertraxmag.com
Check back frequently for new content and follow us on social media!
Previous articleWin A Ride With Klim
Next articleArrival of 800 E-TEC