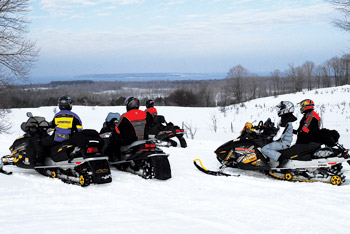 It was 1976 and the family had rolled into Owen Sound, Ontario for a hockey tournament. At the time I only had a passing interest in snowmobiling but, as an unfettered gearhead, I was fascinated by anything with an engine – especially if it was a 2-stroke.

We were booked into the Days Inn for two nights and couldn’t help but marvel at the rolling snowmobile show in the motel parking lot. Trailer after trailer arrived and unloaded sled after sled all weekend. At one point I counted 80 snowmobiles in the parking lot. At that point, I decided that snowmobiling was something I both wanted and needed to get involved in. The rest is history.

Those were the days before OFSC amalgamation and the Grey Bruce was running under the auspices of the old Ontario Trail Builders Alliance. There were several clubs and a central grooming system, far ahead of its time, had been put in place. The Fathers had created a tremendous network of trails that reached south down into the Beaver Valley and went way north on the Peninsula to Tobermory.

There were already effective trail signs and the clubs were using old (they were new, then) Bombardiers pulling big drags to smooth out the terrain. I’d never even seen a groomer before and was amazed to discover these behemoths tracking right through the parking lot, making laser level “snowmobile roads” for the sleds to ride on. I remember driving home and thinking out loud: “Who did all this?”

As soon as I got back to Hamilton, I called my brother and told him: “Mark, we’ve just gotta get a couple of snowmobiles and a trailer. You won’t believe what I just saw!”

Thirty-two years later, the GGrey Bruce Region is still a fabulous place to ride. It’s reasonable proximity to big Ontario cities like Toronto, Hamilton, London, Barrie and Kitchener-Waterloo makes it easy to get to and its history of catering effectively to both winter and summer tourists means there’s plenty of good restaurants and accommodation along the way.

One of its best assets is its unique Southwestern Ontario location allows folks in smaller communities outside the region to ride from their homes right into The Bruce, connecting the small communities and towns there.

The entire Bruce Peninsula enjoys the benefits of lake effect snow and rarely is left with poor grooming conditions. The winters are cold enough to make frequent snow but never so cold you don’t feel like getting out on the trails. And these folks know how to build trails! You’ll find many 20-foot wide routes, meticulously groomed, and all heading toward fun destinations.

Whether you’re riding the expansive open field trails of the southern part or running the magnificent ribbon winding along the rim of Georgian Bay’s cliffs, you’ll find smoothness, plenty of access to food and gasoline and some of the best Ontario winter scenery ever.

One absolute don’t-miss destination is the Skinner’s Bluff Lookout looming 250 feet over Georgian Bay – and that’s only one. There are plenty of great views and vistas here.

Some of the trail routes may have changed over the years but the quality is still as impeccable as ever. Just as this region inspired me to get into snowmobiling decades ago, I can’t help but wonder if it isn’t doing the same to others today.

Kent Lester
Kent Lester is Co-Publisher of SUPERTRAX Magazine and a regular contributor to this website.
Previous articleFUTURE YAMAHAS: CAN THEY BE LIGHTER?
Next articleANOTHER ARCTIC CAT 2-STROKE DI SYSTEM