FUTURE YAMAHAS: CAN THEY BE LIGHTER? 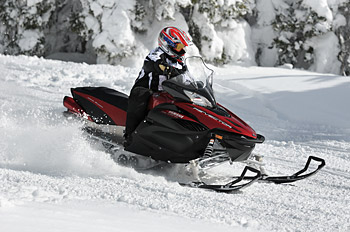 There’s some pretty significant scuttle circulating Yamaha is coming with a new sled or series of sleds for model year 2014.

That means as soon as next winter there could be an all-new Big Y platform on the snow. What are the goals Yamaha’s engineering team would be reaching for?

Certainly, the first thing would be weight. Although the Nytro platform is not overly heavy for a 4-stroke, it’s been a fairly polarizing sled from a consumer perspective.

The Nytro does well as a crossover and a rough trail sled but just isn’t the kind of sled Yamaha could base a whole model series on including touring sleds and long distance trail runners.

Probably the likely target for change is the sled that’s been the bread and butter of the Yamaha line-up for a long time: The Apex-Vector platform.

There’s certainly good opportunity to pare weight out of the Apex but it may mean Yamaha will have to walk away from some of it’s best and most established technology.

For one, rear-exiting exhaust in the style the Apex and Vector use is not a lightweight system. Its sizzle is in its exhaust note and in order to lose pounds it may have to go.

Even features like EX-UP and EPS add a lot of extra weight and a new design may not have room for these attractive Yamaha-signature benefits.

Even the 4-cylinder Apex engine may require a rethink and be deep-sixed. The extra parts and complexity of this fabulous motor may be (literally) outweighed in a quest for lightness and lower manufacturing costs.

Sometimes, the very thing that makes a company famous is the same thing holding it back.