IS THE REV-XS REALLY HEAVIER? 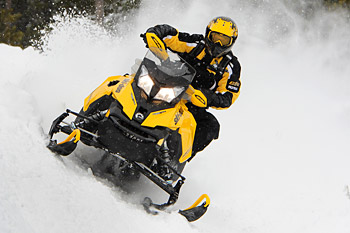 We’ve heard some comments about the published weight of the new REV-XS indicating it has gained weight.

On the surface it would appear, compared to some other super-lightweights like the Polaris Indy 600 or even the current REV-XP, the new XS bodywork has caused the sled to plump up.

Here’s the fact: The maximum net weight gain on the 2013 XS, with it’s much more ergonomically pleasing bodywork, is less than three pounds over the XP.

Sure, the spec charts will tell you there’s a much bigger difference (over 20 lbs more) but the published weight figures showing an overall gain in mass is because all 2013 REV-XS models now come with electric start.

Ski-doo is so serious about including ES on its newest platform, there isn’t even a recoil starter included. The right knee panel has no location for a pull cord at all and it looks like a 4-stroke panel. Only the XM mountain sled has a recoil and optional ES.

Although weight is weight, we are absolutely in favor of this move toward electric start on all snowmobiles.

It’s been a long time coming and now that the industry has worked miracles to get the mass down on sleds, we think the pull-cord argument has zero validity.

With the heavy onslaught of 4-stroke sleds over the last decade and so many buyers ordering 2-strokes with ES, it looks like the majority of owners are making a strong statement it’s time to come out of the dark ages with our sport and make ES a standard feature on every sled.

Staff Report
Previous articleIS THE LONG TRACK TAKING OVER?
Next articleFUTURE YAMAHAS: CAN THEY BE LIGHTER?