IS THE LONG TRACK TAKING OVER? 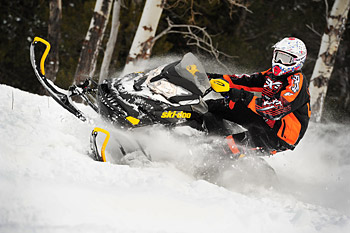 Industry stats are indicating sales of sleds with 136-inch and longer tracks are beginning to dominate. Does this mean buyers are moving away from 120-inch-range footprints to something more?

More specifically, does it mean the conventional short track, high performance buyer is losing traction (literally) in the marketplace?

Here’s what we think is happening. We think there are just as many high-perf focused buyers out there as ever. What is different is these same buyers are looking to increase the usability of their sleds over the course of the season.

Fact: If you’re paying 10-plus Gs for a new sled you want it to be usable in more conditions than just one venue, like groomed trail riding.

Furthermore, performance buyers demand the ultimate for their bucks these days. If they’re anteing up big dollars, they want acceleration, top speed, traction, gas mileage and a sled that won’t be made obsolete by EPA numbers anytime soon. A tall order.

The fact is, the very same rider who has owned 120 and 121-inch sleds the past decade may be opting for a longer tracked high-output sled that can be used off-trail once in a while or even adapted to 2-up riding with an aftermarket seat. For the price they’re paying, new-sled buyers want more than just an all-out lake rocket.

Another factor is the blasting of the theory longer tracked sleds are slower. This is simply untrue. You can often achieve the same acceleration and even higher top speeds with a 136-plus than with a short tracker.

It’s all about traction and, at the high end of your speedo, your sled is losing some. A longer track bites better and reduces track slippage so all the power is getting to the snow. More on this later.