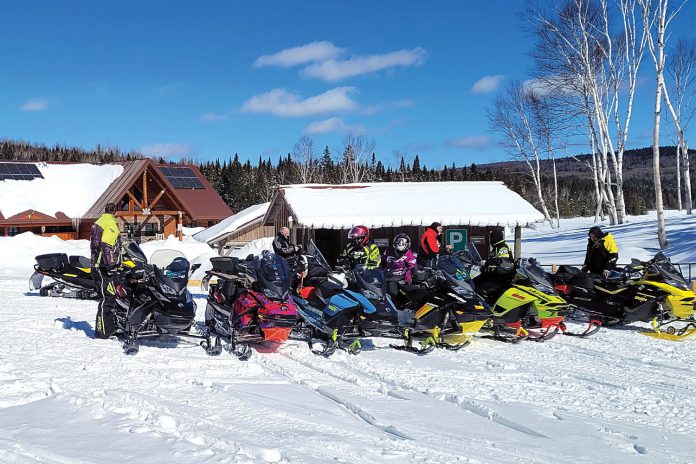 Now, Dasher! Now, Dancer! Now Prancer and Vixen! On Comet! On Cupid! On Donder and Blitzen!Now dash away! dash away! dash away all! These famous words spin ’round your head on one awesome trail after another. It’s a dream come true to ride such a never-ending abundance of wide, sweeping, scenic trails – and they just kept on coming, in and around Canada’s newest sledding playground – the Christmas Mountains of Northern New Brunswick.

Last March, our crew trailered to Edmundston, staging from there for a four-day, saddlebag tour. We’d heard that the Christmas Mountains are fast becoming a New Brunswick go-to destination and wanted to see what it is has to offer.

Little did we know that there’s much more to the Christmas Mountains than first meets the eye. The project had a soft launch for the winter of 2021, just in time to mark the 40th Anniversary of the New Brunswick Federation of Snowmobile Clubs (NBFSC). But there’s also a remarkable backstory to the Christmas Mountains – a real eye opener about how to create an extraordinary snowmobiling destination. Here’s the story behind the story…

Ross Antworth, now retired General Manager of the New Brunswick Federation of Snowmobile Clubs (NBFSC), wanted to bring the Black Hills of South Dakota home. After a 2007 visit to this iconic snowmobiling area, Antworth envisioned transforming a series of north-central New Brunswick peaks in the remote interior, into a must-visit destination in Eastern Canada. But along with the NBFSC, it took a host of committed partners and stakeholders, including First Nations and all levels of government, about 15 years to bring the Christmas Mountains dream to life.

That achievement couldn’t have happened without a confluence of prior events. Topography provided a solid foundation thousands of years ago, positioning Northern New Brunswick as far north as Saguenay Quebec or Cochrane Ontario. Geology contributed a sub-range of the Appalachian Mountains so the New Brunswick interior benefits from the colder climate of higher elevation. Both of these factors combine to deliver a must-have for a great snowmobiling destination: long, cold, snowy winters for early and late riding, often to the end of April.

The forestry industry added its own important contribution in the mid-nineties, when it began building logging roads in these north-central mountains. The resulting network of corridors and bridges, engineered to support the weight of logging trucks, provided an invaluable trail framework for the newly envisioned snowmobile destination.

Then around 2010, the “Northern Odyssey Tour” was introduced as a new snowmobiling experience in Northern New Brunswick. It’s an exceptional snowmobile adventure anchored by Edmundston, Campbellton, Bathurst and Acadian Peninsula. Still going strong, the Northern Odyssey provided a network of trans-provincial trails with numerous connections to towns, services and amenities, that helped open the remote interior access for trail riders.

What’s In A Name?

Wightman’s naming was inspired by the 1823 poem quoted at the outset of this article, whose memorable first line is “‘Twas the night before Christmas, and all through the house…”. Apparently, Rudolph, who wasn’t popularized until 1939 in the holiday season song “Rudolph the Red-Nosed Reindeer” missed out on a summit of his own. Located near Mount Carleton, the highest in the province, these peaks soon became collectively known as the “Christmas Mountains”. Little did Wightman know that his fanciful monikers were destined to become a very special snowmobiling brand 57 years later.

Fast forward to more recent times. Many important building blocks for a “Black Hills” style destination were already in place in New Brunswick. But the question was: How to bring them together and optimize their collective value? A great place to start was with some of the attributes that have helped make the Black Hills successful. So in 2013, the NBFSC commissioned renown Trails Work Consultant, Kim Raap, to write a report called the “Snowmobile Trails Development Plan”.

That plan described how snowmobile operations in the Black Hills revolve around the Hardy Work Center. Run by the US Forest service, this historic collection of two log cabins, one logshop/garage and two modern garages, is located in the remote heart of the Black Hills. It’s used by employees of the State of South Dakota in the winter to maintain snowmobile trails.

The centralized concept in a remote area enables a more effective and efficient grooming operation with dedicated groomers and paid operators stationed on site. From this hub, groomers can spoke out regularly, doing one-way passes on runs that loop back to base. And with groomers & operators centrally located, grooming surrounding trails is their only priority and occurs more frequently.

If the machines were individually based miles away at various towns, keeping these remote trails smooth wouldn’t happen as often. Also, it’s much easier for groomers at a central base, closer to their grooming runs, to undertake early and late season grooming, when surrounding access trails at lower elevations don’t have enough snow.

Show Us The Money

Several years later, the province recognized project progress when the proposed “Christmas Mountains Snowmobile Network” was designated a “Signature Trail” attraction in the New Brunswick Trail Action Plan. This document rated the Christmas Mountains project as 90% ready to meet the Signature Trail criteria of being strategically located, safe to ride and sustainable into the future.

Soon after, a multi-million investment transformed the existing operational base for the staff of Mount Carleton Provincial Park into a contemporary New Brunswick equivalent of the Black Hills’ Hardy Work Center. The New Brunswick government funded two new groomers located at this new hub, and trained staff to operate them for the winter months to take the grooming load off area snowmobile clubs.

A new fuel depot now keeps the groomers running (and provides gas daily for visiting sleds), while a magnificent new warm up facility is open daily (until 11 pm) with bathrooms and WIFI for winter visitors, plus store & snacks (open Thurs. to Sun). Several new park bridges were built to accommodate the new groomers, while new warm up shelters now offer rest stops on Christmas Mountain trails.

As our crew did, riders can access the Christmas Mountains from several gateway staging locations: In the west, from Edmundston (180 km via NB12 & 19) or Plaster Rock (115 km via NB23); from the east via Bathurst (129 km via NB19 or 23); or to the south from Doaktown-McNamee (184 km via NB58) or Miramichi (212 km via NB52 & NB23). And true to their Christmas theme, several hundred kilometres of new trails are shown in red on NBFSC print and online maps. The trails are named Prancer, Dancer, Vixen, Comet Cupid, Candy Cane and North Pole (once again, latecomer Rudolph didn’t make the cut).

A Work In Progress

The Christmas Mountains is a dream coming true. But it’s still a work in progress. Developing Mount Carleton Lodge into a 7-day a week winter operation for food service and winterizing existing their accommodations, would be beneficial. Having both a Christmas Mountains trail map and background info mounted on wallboards at Mount Carleton Lodge would help build visitor interest. So would “Welcome to the Christmas Mountains” billboards on every trail leading into the area to promote its status as a go-to destination and let visiting riders know they’re arrived.

One other valuable asset of the Black Hills hasn’t yet been officially realized in the Christmas Mountains – an integrated backcountry riding component. With Crown Land prevalent throughout the 52,000 acres of Christmas Mountains, plenty of legal opportunities exist for powder riding. Remember all those logging roads I mentioned earlier? Many are now unmaintained, endless corridors where local backcountry enthusiasts already get their ya-ya’s out. But so far, visiting riders are left to discover backcountry opportunities on their own, whereas designated and promoted areas (and guided rides) would solidify the Christmas Mountains’ growing reputation as powder central.

Regardless, 15 years after Ross Antworth brought a dream back from the Black Hills, the Christmas Mountains now provides an outstanding trail riding experience – early, late or anytime in between. It’s a natural complement to the Northern Odyssey, albeit a destination all its own. Areas towns and remote operators are already reaping the rewards from a notable increase in ridership to the area.

Many other snowmobiling regions could use the New Brunswick playbook to help create their own special destinations. Yes, it’s truly Christmas all winter long in Northern New Brunswick – so now’s the time to start planning your Christmas Mountains adventure ride this winter! 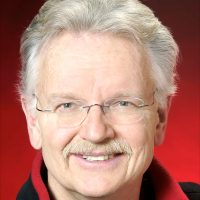 Craig Nicholsonhttp://www.intrepidsnowmobiler.com
Popularly known as The Intrepid Snowmobiler, Craig Nicholson is an International Snowmobile Hall of Fame journalist and Supertrax contributor. Craig has snowmobiled in every region of Canada and many states. His one-of-a-kind tour book, "Canada's Best Snowmobiling – The Ultimate Ride Guide", chronicles his adventures, as does his website and Facebook page.
Previous articleIS ELECTRIC LOSING MOMENTUM?
Next article4-STROKES: Snowmobilers’ Love Affair With Triples!

*Subscribing indicates consent to receive newsletter content to the provided email. Of course, you can unsubscribe at any time.