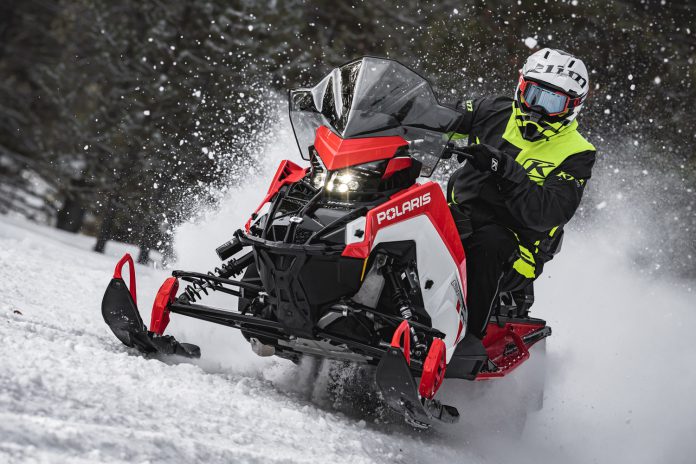 There’s a lot of stir amongst 4-stroke fans about the outright audacity of Polaris introducing a big-inch 4-stroke twin this year. Doesn’t Polaris know that all performance and semi-performance 2-strokes should be triples?!!

Yeah, a bit tongue-in-cheek but isn’t it true that the strongest selling, longest popularity has come from 4-stroke triples like Yamaha’s 1049 and 998 and Ski-Doo’s ACE 900?

If you compare the sales of just those three 3-cylinder engines over the last five years, the numbers would likely eclipse all of the 4-stroke twins and V-twins ever offered in a snowmobile – all time!

So, what’s the fascination with triples? On the negative side, there’s a lot more complexity and moving parts in a triple (hmm, about 30-percent more, I’d say, compared to a parallel twin). This adds up to extra weight and even some physics challenges with a long crankshaft rotating at high RPM whose centrifugal force is trying to turn 90-degrees against the sled’s line of momentum. None of that seems to matter. It’s really about two things: smoothness and sound.

If you need proof, reach into your memory banks and recall when Arctic Cat offered a Suzuki-built 4-stroke twin (both EFI and turbocharged) in the current ProCross chassis. The twin was as reliable as Abe Lincoln and made enormous power in its turbo version.

The 1170cc twin was also a really good powerplant without a turbo – but Cat had trouble getting snowmobilers to believe in it. Apparently, it didn’t sound good enough.

Gotta admit, when the company swapped over to the 1049 triple in the ZR and the 998cc turbo for the Thundercat, it immediately got snowmobilers juices flowing. The banshee wail of either triple powering down the lake at full cry was unmistakable – and unforgettable!

I guess my point is this: None of this is about technical superiority. Twin cylinder 4-strokes such as the jewel-like Phazer 500, Polaris’s old Weber 750 – even Ski-Doo’s dimunitive 600 ACE twin, did the job they were intended for and often overachieved in their applications. None of them set sales records.

The triple cylinder sound and smoothness thing is an interesting phenomenon. Back in the day, 2-stroke triples like the original Thundercat and Mach Z held center stage and compared to 2-stroke twins displayed almost no vibes through the handlebars or running boards. The exhaust note those engines made quickly was dubbed by Supertrax: The National Anthem of Snowmobiling!

So, what happened to all those 2-stroke triples – the same ones that made enormous, high-revving power? Well, they got replaced by torquier, lower revving 2-stroke twins! Go figure.

Not saying the same thing is going to happen with 4-stroke snowmobile engines but Polaris with its new S4 twin has gone away from the even-firing design (Suzuki 1170 and Weber 750) and gone to a more conventional alternate-firing layout. This means the two cylinders fire at 270/450-degrees, one, then the other. The sound is much cleaner and has a delicious exhaust note.

We’re quite used to this new Polaris S4 engine, having sampled it in various horsepower outputs in the off-road biz, and it’s very responsive, versatile and responds well to turbocharging. It also has a really sweet exhaust note – and that should just about do it for snowmobilers.