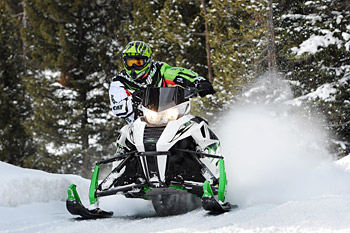 We’ve already written about two different direct injection technologies Arctic Cat could potentially use on its new generation of 2-strokes.

There’s at least one more system that comes under the category of low pressure DI and it is widely used and licensed in the marine and scooter business.

Orbital Injection is best known for its use in Mercury Marine 2-stroke outboards and was once licensed to BRP for use in some Sea-Doo models in the early 2000s.

The parent company, Orbital Engine Corporation (now Orbital Corporation), is from Australia and developed and patented the system in the early 1990s.

Orbital technology injects a mixture of fuel and compressed air into the combustion chamber under pressures not exceeding 2000 psi air pressure. When the air expands it atomizes the fuel.

It’s interesting to understand each of these companies holding licenses have added their own technical improvements to the Orbital system to make it unique but have kept the basic principles intact. It’s very much like Ski-Doo’s (BRP’s) E-TECH set-up being a huge evolution of the original Ficht system.

The original Orbital was called a 2-part or 2-stage DI because it injected the air and fuel separately, both being under pressure (air pressure much higher than fuel pressure) and in a “sealed” environment – a bit of a tweak on TLDI.

At any rate, Orbital licenses are readily available and the technology is not only very good but has been proven over and over worldwide. Apparently Orbital has made over $150 million licensing its patent.

We think Orbital gives Arctic Cat the most room to “personalize” its DI and incorporate its own unique fingerprint on how the system operates, much like Tohatsu has done.