DOES SKI-DOO HAVE A NEW 4-TEC ON THE WAY? 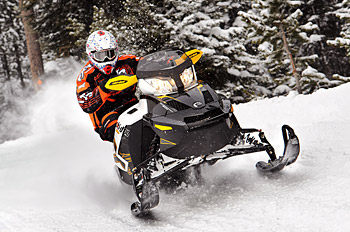 There’s something shaking under the ground at Ski-Doo’s Rotax headquarters in Austria and we think it’s a newly re-tuned 4-TEC triple.

Think about this: It’s pretty common knowledge Yamaha is coming with a new, lighter all-purpose snowmobile chassis soon – perhaps even next year. Yamaha is not at all happy it is not leading the industry with the most 4-stroke sales and it looks like the battle is about to rage.

Ever since Ski-Doo’s 1188cc 4-TEC mill was shoehorned into the very light XR chassis it’s been a hit. Most surprising is its sales success with former 2-stroke owners looking for more reliability and longer engine life.

Many of these new 4-stroke converts are the same customers who normally buy the ultimate performing 2-strokes in the 160-plus horsepower range. It seems a bit strange when you realize the 4-TEC engine produces horsepower closer to the 130-hp plateau.

We’ve heard these people say they wish the Ski-Doo 4-stroke made more power but are willing to give up some of it because of the sled’s extreme lightness, good handling and great torque output.

Essentially, the result is a sled that behaves very closely like a high performance muscle sled, especially at the big end of its speedometer.

We think this big-inch 4-stroke (really, the biggest 4-stroke in the business) has great potential to make horsepower in the hyper-sled range and it doesn’t need a turbo or supercharger to deliver it.

If this engine was boosted via cam timing, three throttle bodies and perhaps even larger valves, it could make 150-160 very reliable ponies with only a minimal increase in weight.

We think this is definitely on the drawing boards and if Ski-Doo is planning on a new XR bodywork update similar to this year’s XS, it would be a great opportunity to own the 4-stroke hypersled market.