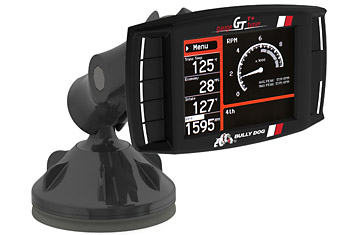 Here at Bully Dog we are extremely excited to have released the very first tuner for Toyota trucks!

Don’t miss out on this huge opportunity, customers across the country have been waiting for this moment and the GT-T+ is now available.

The tuning that comes with the GT-T+ offers increases in power, fuel economy and performance as well as a huge number of monitoring capabilities that will let drivers know exactly how well their vehicle is performing.
The tuning will provide up to 25hp and 30Ft/Lbs of torque depending on the applications and a speed limiter adjustment/removal functions are also included. Four tuning levels will be packaged with the GT-T+; stock, tow, regular and premium. This will allow any Toyota driver the ability to customize their ride to their specific needs.

Don’t worry though, if you own a Toyota that doesn’t fall under these, just keep a close eye out because our priority is to support every Toyota, so we will be offering more supported models as 2013 rolls on.
A new data logging function will also be introduced on this new GT model, allowing drivers to log parameters for up to 3 minutes on the device and store them until they’re needed, at which point the information can be played back for analytical purposes.

For more information on the Bully Dog GT-T+ for Toyota contact your Bully Dog Sales Rep today at 940-783-9914.
Bully Dog is the industry leader in developing full-featured aftermarket enhancements for an unprecedented number of vehicle applications. Founded in 1999 and guided by the idea that every vehicle possesses untapped potential, Bully Dog equips gas, diesel and heavy duty drivers with the tools to unlock their rides’ potential power and economy gains.

Visit us online at www.bullydog.com