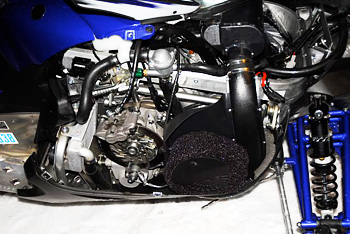 The second sled Yamaha had loaded in the trailer that morning was a late model Apex painted bright metallic blue and laden with stock graphics.

Since Chris Reid from Yamaha could talk freely about it he was quick to give us details. This was a 2009 model with all the 2010 updates but it had something special under the hood.

We’re used to this kind of stuff from Chris. He has an aversion to outlandishly powerful, turbocharged Apexes and we’ve ridden some of his personal projects before, some spinning over 200 ponies around the corral.

This one was sporting a device called a Yama-charger. He explained it had been developed by Yamaha guru, Gilles Gagne, a brilliant Yamaha dealer in Quebec, who had been instrumental in putting together a team reaching beyond the 200mph barrier with a snowmobile at Bonneville last September (see the story in Supertrax Volume 21 #4).

When Chris peeled the hood panels back on the Apex we realized this was something far different than we’d seen before.

The Yamacharger works on the same principle as a conventional turbo except it has no turbine side driven off the exhaust.

The drive source for the boost was from the Apex engine’s 10,000-plus RPM crank spinning a compressor to generate only a few pounds of boost (anywhere from 2-5 lbs.). This boost level, produced at relatively low RPM for a turbocharger, is enough to generate an extra 15 to 20 horsepower on a stock Apex, bringing its peak level up into the 165 to 170 range.

We’re from Missouri but after riding it we had no doubt the Yamacharger was delivering a substantial kick in the pants to the Genesis 5. This thing could rock – especially up top.

The best part is the charger requires no reprogramming of the stock EFI module, no exhaust mods and very little trimming of plastic.

Its airbox is very compact and is designed to carry the low boost charge to the throttle bodies without taking up much space in the already cramped Apex engine compartment.