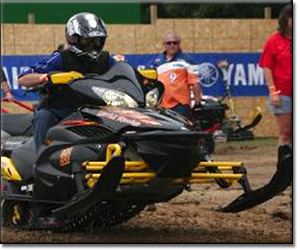 The annual snowmobile grass drag season began where it left off last fall – with Yamaha drivers atop the podium in two different series on Aug. 26.

Yamaha captured three firsts at the NSRA Outlaw Grass Drags in Princeton, MN, with the highpoint set by Allen Ulmer when he won Stock 600 on an Apex four-stroke. In fact, Yamaha machines claimed three of the top four spots with Jerry Fix and Pat Hauck claiming third and fourth on their own Apex sleds.

Rocky Miller began the Yamaha wins in Greenville, Mich. by taking his Lustilla Racing Vector to the Stock 500 win over teenager Ashley Agdorny in her first race aboard a Nytro. Nice job Ashley!

Miller also claimed Stock 600 on a 2007 Apex – just a week old and with only 17 miles on the odometer – by beating Ashley’s dad, Steve Agdorny, on his new Apex.

In addition to the racing action, the crowd was blown away when Yamaha Free-style rider Jimmy “Blaze” Fejes pulled off an incredible back flip on a modified 2007 Phazer. Quite a power play for Yamaha’s new four-stroke Phazer!