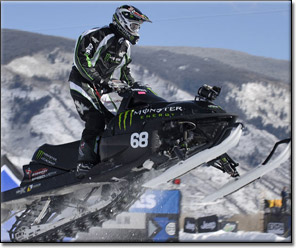 T-Train is Back on Track with Arctic Cat

“I want to prove to everybody that I’m still capable of running up-front and winning races on a snowmobile,” Hibbert said. “I’ve been with Arctic Cat my entire career and am confidant that their Sno Pro is the best sled out there.”

Hibbert’s racing career and relationship with Arctic Cat began when he was only three years old on a Kitty Cat. Before his 18th birthday, he won three national World Snowmobile Association points championships and three medals at ESPN’s Winter X-Games. In 2003, he chose to pursue a full-time professional motocross career. Since then, he has competed yearly in the Winter X-Games, capturing snocross silver medals in 2004 and 2005.

“Team Arctic Cat is very excited to have Tucker back and involved in our snocross program,” said Russ Ebert, Team Arctic Cat’s Race Manager. “He is an excellent role model for young Team Arctic riders. Tucker has some very special skills. Few riders can read lines on a race course and execute as precisely as he does.”

Hibbert will compete in the first four WPSA snowmobile events and ESPN’s Winter X-Games. Backed by Arctic Cat, he will have the flexibility to bring in his own sponsors and crew.

“I’m excited about having my own program with Arctic Cat,” Hibbert said. “I want to take the sport to a new level. This is a great opportunity for me to bring in corporate sponsors and to continue my relationship with past sponsors.”

His father and racing legend, Kirk Hibbert, will lead the team’s mechanics and equipment.

“The last couple years at the Winter X-Games have been the highlight of my seasons,” Kirk Hibbert said. “I’ve really missed racing with Tucker and am looking forward to working with him again.”

Hibbert’s weekends will be spent on the snow but it’s back to the dirt during the week. He is the only athlete in the world to competitively race both snowmobiles and motorcycles at a premiere level.

“I’ll still be racing motorcycles full-time and am 100% driven towards achieving my goals in snocross, supercross and motocross,” Hibbert said. “Competing with the top riders in two sports will continue to make me a better athlete and competitor.”