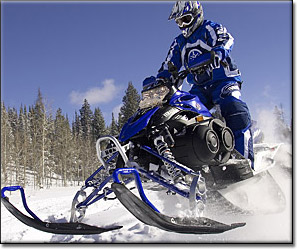 Rumors of limited build models have not just persisted this summer, they’ve been more intense than in the past three seasons.

Here’s why we think there will be new models debuting sometime during this season from at least two snowmobile manufacturers. Note: Don’t expect anything limited to show until late January; this will allow dealers as much time as possible to clear out the old before showing the new.

We think the arrival of Arctic Cat’s all-new line-up – the most sweeping intro in the company’s history – left Ski-Doo and Polaris feeling a little self conscious. For the second straight year Ski-Doo is marketing a largely familiar if somewhat lightly massaged line-up of sleds that look pretty much the same as model year 2006.

Polaris, while bringing new style and engines to the table, are tightly skewed to the 600 and 4-stroke segments. Let’s face it, everyone is wondering when Polaris will get back into the big-inch Hypersled biz.

On the other hand, Yamaha is running wide open with the belt at the top of its corporate primary clutch.

More new models (Phazer) flying out of Yamaha’s factory has everyone wondering how much stuff the previously content-to-be-last sled builder is prepared to introduce every year.

It doesn’t take a genius to see the sizzle factor is clearly in the Arctic Cat and Yamaha camps this year.