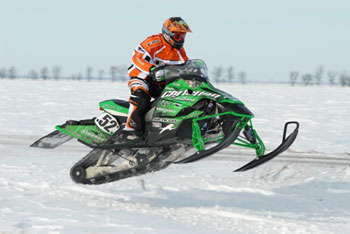 Sweeps Away the Competition in Hillclimb, Cross-Country and Snocross

Team Arctic racers got out the broom again this past weekend, methodically sweeping their classes – and the competition – in snocross, cross-country and hillclimb events across the country.

The most complete class-cleaning occurred at the RMSHA hillclimb in Afton, Wyo., where Team Arctic racers won an astounding 14 classes – including a sweep of the 800 Stock, Improved and Mod classes with the best-selling M8 HCR – plus three King of the Mountain titles.

Add to the tally wins in 600, 700, 1000, and Open classes, and it’s evident that the ever-versatile Arctic Cat’s M Series can climb mountains and clean the competition’s clocks.

“We won more than half the classes in Afton, and at least one final in every engine category,” said Mike Kloety, Team Arctic Race Manager. “This was just the third race in the RMSHA schedule and our best performance of the season, so clearly the team’s trajectory is pointed to the top.”

While the hill-climbers were standing the highest out west, Team Arctic’s eastern contingent welcomed USCC cross-country to Tug Hill, NY, for the first time. And with their welcome came the obligatory door-slam-in-the-face of the competition, as the guys in green stood atop of the podium in six classes.

The trip to Tug Hill by Team Arctic/Christian Bros. Racing star D.J. Ekre proved worthwhile, as he led a sweep of the Pro classes aboard his Sno Pro 600, while helping kick-off cross-country racing on the east coast.

National-level snocross racing made its first and only foray into Canada this weekend, at the ISOC Canadian Nationals/CSRA regional in Sarnia, Ontario.

Four class victories highlighted the team’s success as it presses to finish the season strong and on top of the points’ battles.

Semi Pro stalwarts Cody Thomsen and Logan Christian each won a class and took third on another, with Christian leaving Sarnia with the points lead in both classes.

This next weekend (Feb. 27-28) Team Arctic racers will tackle the USCC cross-country in Munising, Mich. See www.usccracing.com for more info.