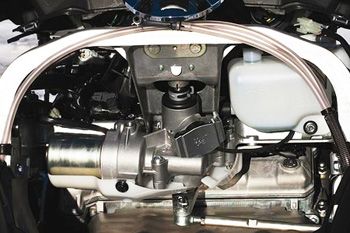 By the end of our ride that day we had pretty much confirmed in our minds we had been riding a new version of the Apex and, although Chris and Bryan would neither confirm nor deny our suspicions, it wasn’t until a couple of weeks later Yamaha officially unveiled the 2011 version complete with graphics and all the technical details.

We learned the engine was the same rock reliable Genesis 5-valve 4-cylinder the Apex and RX-1 had been using for years. However, there were changes to the engine’s cam duration and lift that boosted its power output at least five horses.

Another nifty innovation that ends up making the engine sound so different is found in the exhaust system right under where the driver sits.

A special butterfly valve device, placed inside a chamber or box where the exhaust goes from four pipes to one, controls the pulses of the big four and performs the same kind of magic you’d get with a 2-stroke expansion chamber.

Actually, it’s preventing the ‘blow-back’ characteristic 4-strokes develop in the exhaust system because of valve overlap.

In this case, there’s better throttle response and a sense more torque is produced. EXUP, the name Yamaha uses for this device, also gives the Genesis a much smoother power delivery and makes it feel like a completely different engine, thus our earlier and wrongheaded speculation it was the crossplane.

Not only did we eliminate this guess but we also learned the engine had not been lowered in its engine cradle. This seemed like an impossibility given the way the mystery Apex we rode handled that day.

Of course, the reason for the handling improvement was because of the Apex’s EPS. Power steering makes all the difference and is one of the most incredible improvements we’ve seen on a snowmobile so far – especially on a somewhat heavy 4-stroke.

The bad news is, there is a trade-off with weight. The electronic system adds several pounds of mass and although you certainly don’t feel it (the new Apex actually feels way lighter than last year’s when you ride it), there’s an undeniable weight penalty with this feature.

However, combined with the new skis and various geometric changes to the front end, the EPS Apex is an absolute wonder!