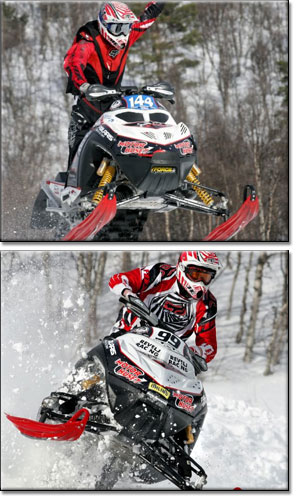 In any language, on any continent, Polaris stands for “Winning Performance”. This past season it was proven again as Polaris captured the Stock 440 title won by Marcus Evensson aboard his Polaris IQ® race sled in the 2007 Swedish Championship.

Evensson’s victory was the fifth in a row by a Polaris racer in the Pro 440 class at the Swedish Championships. Two of those titles (2003 and 2006) were won by Polaris racer Johan Eriksson, who battled through mid-season injuries this past winter to finish fourth in Pro 600 points on the Swedish circuit. Eriksson also competed in the Winter X Games in Colorado in late January.

Racers were tested by a demanding race course in this season’s Swedish Championships, and Evensson used the performance, durability and quick handling of his IQ racer to his full advantage. He won the first race in the 440 competition, and then ran smart and strong to finish third in the second race, which allowed him to clinch the title.

Building upon a legacy of industry leading suspension technology and simply the best ride and handling in the business, Polaris recently introduced an IQ Racer for the aggressive trail rider.

For more information on the 600RR and the complete 2008 Polaris line-up visit www.polarisindustries.com/snow2008 or see your local Polaris Dealer.