PART 2: We Meet the Mystery Sled 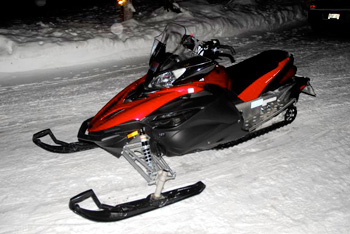 We peered through the hood vents, laid down on the snow to inspect things in the tunnel and even stood back and squinted – my secret way of revealing deep truth and hidden data. No luck. Chris and Bryan weren’t talking and we’d have to form our own opinions based on our incredible perception and insight.

The twin, rear exiting exhaust finishers shot condensation and melodious tones skyward into the frigid atmosphere and only added to our puzzlement. It wasn’t until Mark stole Chris and Bryan away for a moment that I hopped aboard and took it for a quick zip around the Supertrax Cave compound. It was then my suspicions were heightened. A half hour later we were on the trails.

Mark and I switched back and forth on the candy-apple red mystery sled a couple of times and discussed on-trail what we were experiencing. It was kind of a fun game, this not knowing for sure and having to speculate.

Here’s where we were with our guesses: We had noticed the new exhaust sound – check. We observed the power delivery was stronger on this sled – check. We felt it handled much better than any Apex or Vector we’d ever ridden – and not by a slim margin, either. Check.

Here’s what we were thinking: A possible lowering of the engine in the bulkhead to get a better center of gravity; maybe a completely new, lighter engine (we were pretty sure this was a 4-cylinder mill, not a triple), possibly with Yamaha’s proprietary Cross-Plane design used in the R1 Yamaha road bike where the cylinders fire at 90-degrees; thus explaining the unique engine note. It could have been both.

Hmm. Certainly a lowered engine or an extremely light one would help with the Apex’s handling issues. We continued speculating but there was something else going on here and it was difficult to nail down.

Once I stopped second guessing myself and just began enjoying the ride, about twenty minutes in I began to notice how easy the Apex was steering. It felt like every front end component was greased slick and, when the sled was in motion, the handlebar effort was extremely light.

Despite the fact there was plenty of feel up through the bars and zero numbness, this thing tracked beautifully and resisted darting and hunting on hard packed snow like no Yamaha I’d ever ridden.

We stopped and I jumped off to check the skis. I took a look underneath and noticed a new ski profile – one designed to break the snow in front of the carbide and a much less aggressive looking ski-bottom. Good news and long overdue, but, was this the reason the sled handled so much better?

I moved the handlebars back and forth and then I knew: This was the new Apex and it had electronic power steering!