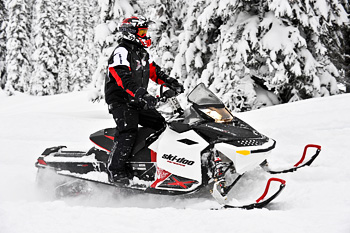 Ski-Doo has retired the MX-Z ‘Adrenaline’ model designation for 2011 and now merges the model into the TNT nomenclature.

It looks like the TNT will be the catch-all model for the MX-Z line as it has the most comprehensive engine selection of any other Ski-Doo model this year. Get this: It’s available with either the E-TEC 800 or the last year’s Power-TEK 800, either the carbed 600 Series II or the 600 E-TEC, or either the fan-cooled 550 or the new ACE 4-stroke.

You can even get a TNT with a 1200 4-TEC – same as last year. All TNTs come with upgraded KYB gas shocks, a handlebar riser, aluminum hookers, a one-inch lugged track, reverse and full gauges.

We’re not complaining about this amount of selection. We’ve found the TNT to offer premium handling and great ride quality no matter what you choose for power. There’s even a decent mid-height windshield on all TNTs this year. Yippee!

The XRS returns for 2011 with race-derived features like upgraded (with a bit stiffer calibration than a TNT) shocks, a 1.25-inch track, race sled brakes, chassis and slide rail reinforcement and a forward mounted steering post with a higher riser for stand-up riding.

The Backcountry and Backcountry X Series Renegades return with lower gearing and 1.75 lugged tracks. Believe it or not, the carbed 800 Power-TEK is still available in many Renegade models in 2011. The thinking here is all about price.

Here’s a tip: Just ante up and get the E-TEC. You’ll be kicking yourself all winter if you settle for anything less.

What about the mountains?