Hibbert and Team Arctic Ultimate at the X Games 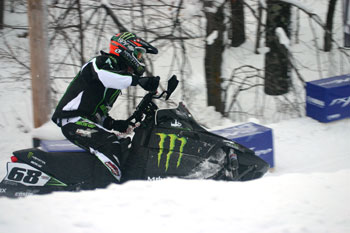 In a venue whose entire premise is “extreme,” Team Arctic’s Tucker Hibbert delivered the ultimate extreme performance of his already legendary career, winning the ESPN Winter X Games gold medal for the third year in a row, the fourth time in his career and in the greatest margin of victory ever recorded.

It was the most dominant performance of Winter X 13, held again this season in Aspen, Colo., and it was backed up by another strong performance by the other Team Arctic racers.

As he has done all season long, Hibbert nailed the holeshot in the 15-racer, 20-lap final and threw down a dozen fierce laps that no other rider could match. By the time he took the checkered flag, the 25-year old from Goodridge, Minn., had a 36-second lead over second place, and lapped all but the top-five racers.

Finishing third in his first-ever main event appearance at X Games was the irrepressible Dan Ebert of Lake Shore, Minn. Thrilled just to make the final, Ebert proved once again that he’s fully transitioned from “up-and-comer” to “the guy to beat.”

After a rough start, Ryan Simons of Camrose, Alberta, was equally thrilling with his charge through the pack that eventually put him in fifth place.

Putting three Team Arctic racers in the top-five was more than Race Team Manager, Mike Kloety, had hoped for.

“It was an incredible and successful X Games for our team,” said Kloety. “All of our racers and teams who made the journey to Aspen put on an incredible show.

“This event is every snocross racer’s dream and the extra work and testing that gets put into preparing for this event paid off. Tucker and his team started preparing for this event one year ago, and with the help of Speedwerx our modified motors run really strong, which made the difference here and will benefit all of our racers for the rest of the season.”

The other highlight for Team Arctic was the third place finish by Cory Davis in the Speed & Style event. Davis, of Soldotna, Alaska, used his fast cornering skills and strong freestyle talent to finish on the X Games podium for the first time in his career.

Supertrax Onlinehttps://www.supertraxmag.com
Check back frequently for new content and follow us on social media!
Previous articleSupertrax RSS Feed Now Active
Next articleNEVER GIVE UP ON A SLED