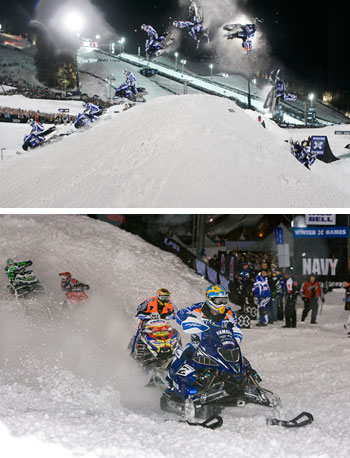 The snowmobile adventurer and part time freestyle competitor chose a trick called “Twist Off”, which he developed himself and executed to perfection on his first attempt.

The effort won Ferguson worldwide acclaim and a check for $20,000. At the same time, he earned the Yamaha FX Nytro® a place in history as the first four-stroke snowmobile ever to take gold in the Winter X Games.

Limited to just four competitors due to the extreme audacity of the event “Next Trick”, similar to “Best Trick” in the Summer X Games lineup, gave each driver a pair of chances to name a specific radical trick they intended to do…and then go nail it!

Ferguson’s “Twist Off” involved a back flip with a twist, a combination he had been working on for several years. But the challenge for the likeable Ferguson was that he would be attempting it on a borrowed FX Nytro® with only three afternoon practice jumps; none of which had involved any sort of flip.

In a twist of fate, Ferguson’s regular freestyle sled, a two-stroke competitor’s brand, was not running properly before the event so he performed the winning jump on a borrowed FX Nytro® practice sled.

“I was nervous leading up to event due to the lack of practice. I had a total of maybe ten minutes of four-stroke experience before starting the competition. My first reaction to the Yamaha four-stroke is that it’s much quieter than a two-stroke,” said a jubilant Ferguson. “And I also didn’t realize how much horsepower I had until I was upside down in the air and I had to let off. I was definitely surprised about the power and torque, and how agile it was to be able to carve off the lip like that. I practically did a flip straight up in the air!”

Eric Josephsen, Yamaha’s Snowmobile Marketing Coordinator, was over the top with the Alaskan’s feat, but hardly surprised by the performance of the very-close-to-stock FX Nytro®.

“This proves that a lightweight four-stroke snowmobile can do anything that a two-stroke sled can do. We put an exhaust on it along with some shocks and bracing on the tunnel to beef it up for the abuse. But that’s about it,” Josephsen noted. “Besides the light weight, it’s the unbelievable torque of the motor that sets our sleds apart. They just accelerate so quickly. Whereas the two-strokes had to do a long run-up Dane could just get to the edge and gas it!”

In snocross competition, the Winter X Games proved to be an anticlimactic outing for Steve Taylor and Iain Hayden.

Taylor recorded very fast 56-second lap times during practice, but a combination of the moment, condition changes, and some poor line choices, failed the potent FX Nytro® from making the main event.

Hayden, who aggravated a shoulder injury sustained at Round 3 of the ISOC Amsoil® Series during testing a week previous to Aspen, was sidelined by team manager Andre Laurin after Hayden was unable to ride effectively in his qualifiers due to pain in his shoulder.

Supertrax Onlinehttps://new.supertraxmag.com
Check back frequently for new content and follow us on social media!
Previous articleSupertrax RSS Feed Now Active
Next articleNEVER GIVE UP ON A SLED