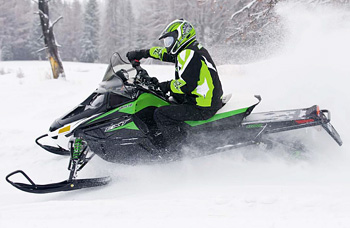 It just makes sense Arctic Cat would be putting focus on its surest bet this year. We’ve been really impressed with the reborn F-platform and its continuing evolution and apparently, so have snowmobile consumers.

For 2011, Cat has raised our eyebrows on two fronts. First, it’s removed some of the baseline models from the F-mix and is playing to shoppers looking for the more loaded version of sleds like the F8.

This speaks large to consumer appetites in a tight economy. Now that the pipeline for unsold one and two-year-old non-current sleds is drying up, customers are actually looking for sleds offering the full array of cool upgrades rather than stripped down versions.

An interesting new model rides in on the laurels gained from the ominous 144-inch Turbo EXT Cat introduced last year. The 2011 F8 EXT features the impressive traction of a 144-inch track with 1.25-inch lugs and the lightness of a 2-stroke.

Everyone knows Cat’s 800 is a very quick engine, and rated at 160-plus horsepower, makes the power-to-weight ratio of this EXT better than even the giant Turbo EXT. What this means is better deep snow capability and perhaps, even more off-trail versatility from the F-long-chassis.

Frankly, last year we were impressed with the 144-inch Turbo’s ability to be trail ridden. It’s handling is surprisingly nimble for a long sled and it gets down the trail at least as good as its 128-inch kin.

Where the Turbo failed to measure up is in extreme off-trail excursions, particularly in deep, soft powder. Weight is the reason for the compromise and the new 800 2-stroke version of the EXT will bring smiles to the faces of those who want the best of both worlds.

With the reduced weight and mega flotation from a 144, this sled may catch the eyes of freeriders. At the very least, it will prove to be a very fast, great riding trail sled with credible off-trail capabilities.

Weight is kept in check with the use of Fox Zero Pro aluminum bodied internal floating piston shocks and one thing we really appreciate is the F8 EXT’s mid-height windshield. Thank you, Arctic Cat. We can now forgive you for last year’s chickadee-beak on the Turbo EXT.

The new F8 EXT also comes with adjustable handlebars (not the telescoping riser) and an adjustable seat.