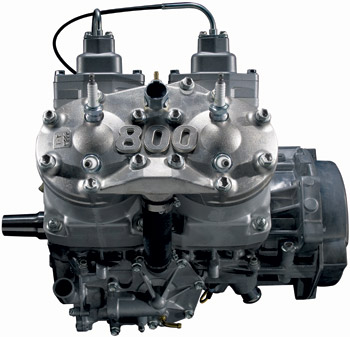 It was the big news last year and it will continue to be Cat’s biggest story in 2011. This is a fast 800 with quick spooling throttle response and big-time delivery of power.

With a lightened crankshaft, new pistons and a modified Y-Pipe along with revised EFI mapping, this 2-stroke is a formidable foe for the competition to deal with.

It meets current EPA compliance and does it without a lot of high-tech complexity. Mileage numbers increased last year and oil consumption has been improved – although not on the level of Ski-Doo’s new E-TEC 800.

Nevertheless, our pick for Cat’s best technology goes to this great 2-stroke.

We’ve put a lot of miles on this engine in both Crossfires and F8 Cats during the current 2009-10 snowmobile season and continue to be impressed with its power.

It’s docile and calm at lower speeds and then turns into a freakazoid monster at high RPM. We like this.

Our one gripe is that by today’s standards, there’s a lot of oil smoke at warm-up and even a bit too much when the engine is warmed up.

I guess we’ve just gotten used to squeaky-clean-burning 2-strokes. No argument with the power, though – and isn’t that why we buy these things?