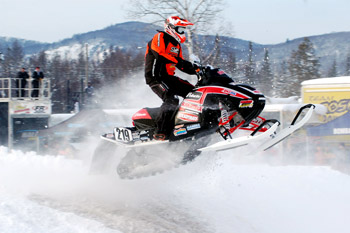 This past weekend the Supertrax / Steadymate / Byers Motorsports Team travelled to CSRA season opener in Sault Ste Marie, Ontario. The race was originally scheduled for Dec 4-6 but was rescheduled due to the lack of snow, which this weekend there was no lack of snow.

The team unveiled its Retro ’79 RXL decaled (by Creechers Design) IQ’s for Fridays practice although it did not start until 3pm due to a heavy snowfall creating little visibility on the track.

Kyle Byers #109 had a great weekend racing in the Sport 600 class consisting of 39 racers. Kyle knew that he needed strong consistent finishes in his motos to make the final.

He got pinched out off the start in moto 1 putting him near the back of the pack into the first corner but battled back to finish 4th. In moto 2, Kyle’s Polaris IQ race sled hooked up and put him to the front and he held his place for 2nd. “There are a lot of good riders in the class and the hole-shot is going to be key in the final to get up front” said Kyle before the final. He did exactly what he had planned on doing and got himself into the top 5. On lap 3, Kyle squared up in a corner and got T-Boned by another rider and finished 8th.

#219, Jamie Byers’ weekend started off with the mod sleds in Semi-Pro Open. The day started off rough, as, in moto 1 Jamie got tangled up with another rider while in 3rd place and finished 7th. Moto 2, Jamie finished 3rd.

Starting in the front row for the final, Jamie didn’t get the best initial start but pulled the sled to the inside of the track and found a good line up the hill. The sled gained traction and pulled him into the Top 5 coming out of the first corner.

Jamie rode hard and led for 2 laps before falling back and had a come-off in the rhythm section at the bottom of the hill with the white flag flying finishing up 12th.

Sunday was the stock class for Jamie and had 29 riders competing for the 15 position final. He had a bad start and had to battle his way from the back of the pack to finish up 2nd in moto 1. “I would have liked to get a better start but I had a lot of fun picking the good lines and working my way through the pack” said Jamie after the race.

In moto 2, Jamie blew a corner finished up 9th. Placing 9th in moto 2 put Jamie to a back-row start for the final. His Polaris IQ and Woody’s traction products hooked up and he dove to the inside of the track once again getting him to the front. He had a strong race and picked the right lines giving him a Top 5 finish for 5th.

The Teams next stop is this weekend in Gaylord, Michigan for the Can-Am Challenge.