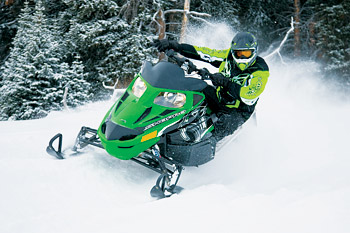 We mentioned earlier that Cat had dropped its baseline versions of some F-Series sleds in lieu of more fully equipped versions.

Both the F8 and the Z1 have been affected by this logic and now the naturally aspirated Z1 comes in two upgraded versions only, the LXR and the new Z1 Sno Pro. We’re not convinced of the rationale here but one thing is sure – we truly like the Z1 in any configuration and we’ve found it to be one of the best 4-stroke offerings on the market.

Another consideration is Cat’s lack of a solid line-up of models in the 600 class – or, in 4-stroke language, 120-125 horsepower range. We think the Z1 is a decent fit in this class and now being offered with more aggressive targeting, as a Sno-Pro, this new model makes some sense.

From an appearance perspective, the Z1 Sno Pro is a pretty strong statement. It’s got one of those hairnet sized low windshields we hate but it sure looks cool enough to turn some heads.

The Sno-Pro also owns a 128×1.25-inch deep lug track and both the LXR and the Sno-Pro get the fully adjustable seat and handlebar combo.

The question remains to be answered: Is the Z1 Sno Pro sizzle or steak? At 123 hp it appears to be competing in pretty heady company beside Ski-Doo’s MX-Z 600 E-TEC and the Polaris 600 Rush, both faster, lighter sleds equipped with 2-strokes.

You could also line it up with 4-strokes like Yamaha’s Vector GT or the TNT 1200 4-TEC – but both those sleds are in the 130 hp range and faster. It comes down to equipment and this is where the Z1 Sno-Pro competes hardest.

It’s unique features are hard to match and potential buyers will need to weigh priorities carefully when showroom decisions are made this year.