Yamaha’s 2013 Tweaks May Not Get Pulses Pounding 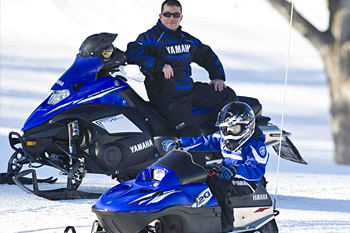 We’ve talked about Yamaha’s renewed focus on the Nytro and its variations (a new 1.75-inch track on the XTX makes a big difference in the sled’s deep-snow prowess).

At the other end the recently upgraded Apex and Vector remain unchanged for 2013. Likewise there are no model deletions or changes to the Phazer line-up.

The Venture line-up gets a new model south of the border, one actually used in the far north and Canadian markets for a couple of years: the Venture TF.

Based on the Venture GT platform, this one features an articulated151-inch track, EPS, wider skis and a standard tow hitch.

The idea is for the TF to appeal to 2-passenger users who frequently have to break trail in powder or are not using groomed trails as much.

Likewise, 2013 will bring a similarly aimed new model to the Phazer-based Venture Lite platform, called the Venture MP. This one offers a 16-inch (the Lite uses a 14-incher) wide track and tunnel with a 144×1.25 RipSaw track.

Once again, this sled is targeted at a unique deep snow market and with its increased track area should be more than capable in powder.

Even the steadfast Viking Professional gets changes this year. Its skis are now wide, blow-molded units and it uses an updated articulated skidframe with a whopping 156x20x1.375-inch track and extrovert drive sprockets.

Interestingly, Yamaha is entering the mini market! Yes, a Yamaha 120 kid’s sled will be available for 2013. This all-blue unit will get the attention of youngsters and their parents and undoubtedly will be parked next to Dad’s big Yammer in the garage.

It’s not a bad idea to offer a 120. How many kids developed an avid brand loyalty a decade or two ago with the onslaught of Ski-Doo, Polaris and Cat minis?