2013 POLARIS: Return of The Iconic Indy 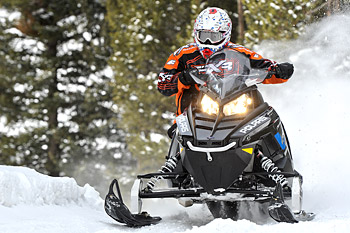 Practical, light, sporty and priced to kill in the 600 class this hybrid combination of the current IQ tunnel and skidframe grafted into the RUSH cast aluminum bulkhead, delivers a chassis fully 30 pounds lighter than the former IQ!

If you remember Supertrax’ historical coverage of the development and launch of the RUSH we discussed how Polaris at one point, about five years ago, was set to simply build this sled as we now see it and not do the Pro-Ride RUSH.

Clearly, the benefits of using common platforms results in economies of scale and gives Polaris a formidable presence in the 600 class with both the RUSH Pro-Ride in all it’s variants and now the Indy 600 and Indy 600 SP.

The new Indy mimics the appeal of the original Indy in many subtle and some overt ways. It’s no coincidence the graphics on the SE version are retro-flavored.

In our opinion the sled even looks like its original namesake from the 1990s. Powered by a 2-injector Cleanfire SDI 600 mill in both base and SP variants, the re-introduction of the Indy will unquestionably create a stir in dealers’ showrooms.

Sounds like something from a 1991 Supertrax Buyers Guide – doesn’t it?