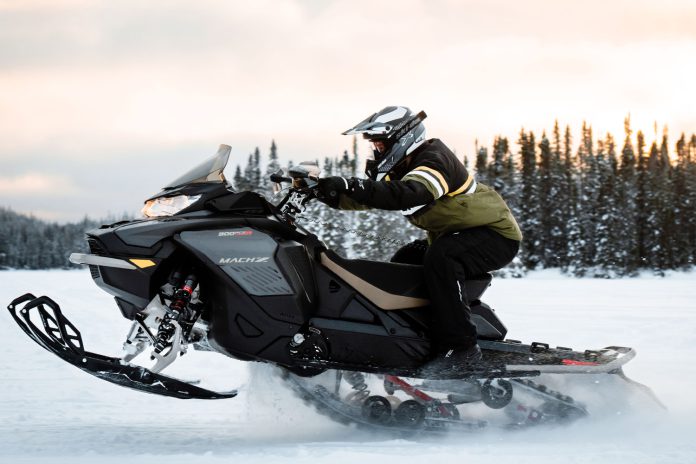 It started two years ago, really.

The most powerful sleds from Arctic Cat and Yamaha – the SRX and 9000 Series turbocharged trail models, unashamedly were offered with 137-inch tracks, not 128-inchers.

There was no alternate choice, either. You couldn’t special order a shorter tracked model or move down the product brochure to get a lower priced one with a 128-inch track.

This year, when Ski-Doo debuted the new Mach Z with an ACE 900 Turbo R putting out 180-hp, there was no alternate one offered with a 128-inch track.

What seems interesting here is the fact a heavier turbo model inherently adds some handling compromise because of the increased weight it’s carrying over the skis. Compound that with extra track length and it would seem to be a formula to deter handling precision. Looks like a bad engineering decision, right?

Although it’s pretty hard to do anything about the extra mass of a large displacement 4-stroke, a turbocharger and about a half mile of added-in plumbing, it would seem at a glance the designers would try to optimize handling by using at least a 128 – or even a 121-incher instead of a track length that was once the exclusive domain of off-trail, deep snow sleds.

You’ve probably already guessed the answer by now, but the whole long-track philosophy is based on traction.

The fact is, any sled that can spin the track freely on demand at virtually any speed, is more challenging to handle and actually may not turn as precisely as a shorter one being driven by a rider who doesn’t like this kind of ball bearing, sliding around riding style. The rider needs to be prepared to ride the sled in a different way than most other high performance sleds and that goes for any track length.

Before you get upset here, let me clarify. There are certain highly skilled riders who can make a 180-hp rocket handle better with a 128. However, not every rider who buys an SRX, Mach Z or a Thundercat is prepared for the intensity that kind of power generates at the handlebars.

Actually, by slowing down the handling a small measure it makes those sleds easier to steer and safer for a larger percentage of the people who buy them. It goes without saying, the biggest benefit is the straight-ahead acceleration gain you get with a longer track.

Also, remember this and don’t minimize it: The performance reputations of these sleds rely on the kind of straight line performance you get running lakes and meadows, not how crisply they handle on a 40-mph trail.

We think the availability of 800 and 850 2-strokes will also be dependent more and more on 137-inch tracks. It wouldn’t surprise us to see all models in the 160-plus range going strictly to longer tracks sooner than later. Although the handling of lighter 2-stroke, 160-hp, 137-inch sleds is undoubtedly better than the heavier turbo models, it’s very noticeable there’s not much difference with the extra nine inches of track (actually less than 4-inches gained on the snow) on these lighter sleds.

There is a caveat here. If you add traction studs to a 137, there is a noticeable difference in handling compared to a studded shorter tracked sled. Although the straight-ahead performance gain is immediately improved, along with braking and even side-slip, initial turn-in is never quite as good as it is with an unstudded track.

Whether or not this presents a problem for performance riders, we’re not sure. It just makes sense that riders who buy 160-180-hp sleds will want to maximize acceleration at any cost. Studs are the best answer, no arguments. And, with super-powerful turbocharged sleds offering pretty shallow 1.25 and 1.0-depth tracks, you gotta have as much bite as possible – on all kinds of snow and ice.

Kent Lester
Kent Lester is Co-Publisher of SUPERTRAX Magazine and a regular contributor to this website.
Previous articleTAIGA GETS IT!
Next articleCAT’S 900 TWIN!