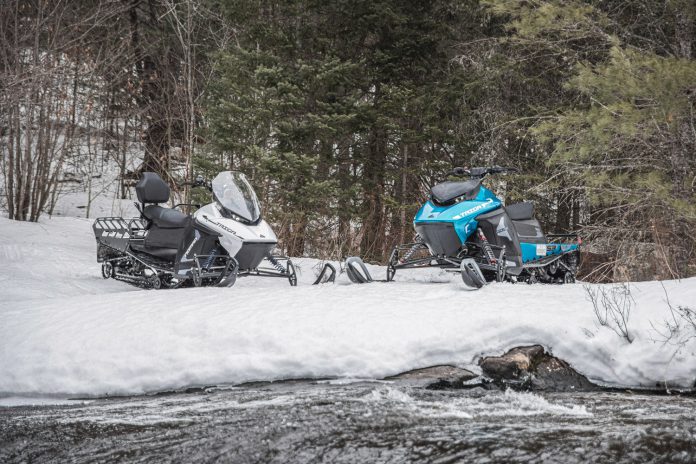 I gotta say, these folks at Taiga are smart. At one point in time when we first reported the existence of an electric snowmobile OEM a fairly substantial backlash of cynicism was felt throughout the industry.

I mean, how could anyone be seriously thinking about building electric snowmobiles? We and just about every other media group reporting on electric power sang the same song. “Won’t work until range, time to recharge and availability of recharging equal a gasoline powered ride.”

And you know what – those three issues are still at the heart of developing true credibility for electric power in the powersports biz.

Here’s what is both interesting and very telling about the minds behind Taiga. The company’s Phase 1 strategy sidesteps all three of these universally accepted detractors to electric powered snowmobiles. Taiga is focusing its efforts on commercial fleet sales of the new Atlas and Nomad models. The plan is (and it is working) to sell Taiga sleds to the likes of large ski resorts for use as service vehicles on the slopes. The other target is large rental operators in snowmobile tourism areas of the North American snowbelt.

This “Phase 1” strategy is on top of the many Taiga dealers which have signed on to retail the sleds when production ramps up next year. By the end of October 2021, accelerated product demand for Taiga snowmobiles and watercraft amounted to 2,632 pre-ordered units compared to 1,246 at the start of 2021. The split between snowmobile and watercraft is virtually even with watercraft representing just slightly over 50% of orders.

Why do I think these moves mean Taiga “gets it”? Taiga knows there is precious few recharge facilities on any of the myriad trail systems across North America. To behave like a Tesla and start capitalizing trail-based recharge centers would be financially untenable.

Obviously, the snow-mo-biz is not the automobile business in terms of unit volume. However, a ski resort or a snowmobile rental operation could easily afford chargers for a small fleet of Taiga’s initially and expand the availability of charging incrementally over the next few seasons.

Time to recharge and range are the other two bug-a-boos with electric powered snowmobiles. In Taiga’s Phase 1 plan both range and time to recharge become non-issues. A rental operator in a market like West Yellowstone could easily cycle Taigas through their operations recharging units as they return from rides into the Park.

The range issue goes away when you consider many rental operators “chaperone” customers on their rides to prevent accidents and mayhem. In other words, ride (and range) distance is carefully controlled.

So here’s the deal. Taiga has already taken more than 130 multi-unit, fleet snowmobile and Orca electric Personal Watercraft (PWC) orders coming from their Phase 1 target market. That is an impressive accomplishment. As this whole electric snowmobile thing moves forward with the intro of both Ski-Doo and Polaris electric powered sleds, more Taiga dealers are sure to emerge.

There’s no doubt in our minds here at Supertrax and SnowTrax Taiga will continue to expand sled sales through current branded snowmobile dealers in both the US and Canada. As battery technology allows and charging centers become more common, Taiga will surely increase its market reach to include all of us.

Mark Lester
Mark Lester is Co-Publisher of SUPERTRAX Magazine and a regular Host on SNOWTRAX TV.
Previous articleTake The Pledge Seriously
Next articleWHY A LONGER TRACK?