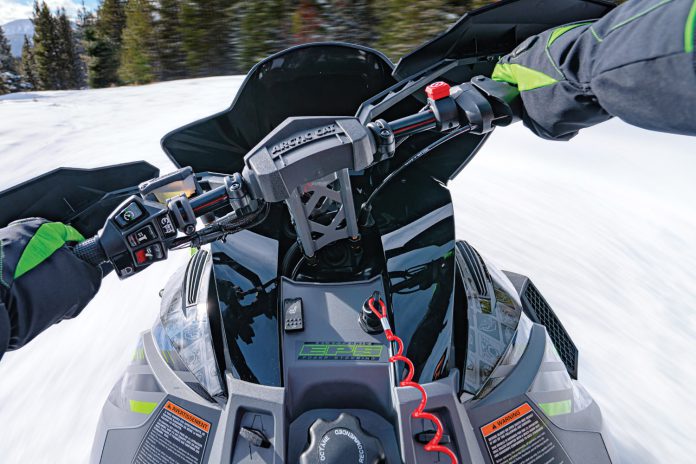 The 900cc engine displacement level has always represented a “line in the sand” statement for 2-stroke snowmobiles.

Back in 1993, Arctic Cat debuted its first Thundercat with a 900cc 2-stroke triple under its hood. At the time, this was the biggest engine in the business by 150 cubes and its incredible straight-line performance got a lot of attention.

Although there were doubts an engine this big could be reliable because of cooling challenges – and about a dozen other questions it raised, the 900 T-Cat proved to be a strong, acceptably durable icon for Cat.

Move ahead a few years and Arctic Cat was back at it again. This time it was with a monstrous 900cc twin!

The new ZR 900 twin landed in 2003 and it was a completely different animal than the 900 Thundercat. By then, consumer demand had taken big displacement snowmobiles to a place where weight was a priority and snowmobile engines needed to generate high levels of torque compared to the screaming high RPM triples of the 90’s that obliterated lakes.

The new 900 twin was a vibrating, raw-edged performer that was an absolute blast to ride! We used to say if you left the sled idling beside the trail and couldn’t find it a few minutes later, it had likely vibrated itself into the ditch.

Vibes aside, suddenly, the rider’s biggest challenge was finding enough traction. The ZR 900 could break the track loose at any speed – yes, even at the top of the speedometer – and demanded the rider’s 100-percent attention!

Scroll ahead again to today and Arctic Cat has the opportunity to blow the lid off the biz with another boost in displacement. Certainly, Polaris and Ski-Doo’s 850cc engine size has established a strong foothold in snowmobiling and many have asked the question: Do we really need bigger 4-strokes than 850s? Good question really, and the eye-popping performance of the current crop of 850s on the market is a good argument for going full-stop on larger 2-strokes.

However, Arctic Cat is in a unique position. The company’s current largest 2-stroke is a very good SDI 800 that churns out power north of 160-hp – not far off what the 850s offer. The challenge comes when potential customers visit showrooms.

For those snowmobilers who are looking for the maximum, outwardly at least, it looks like Cat is about 50ccs short. We would argue Cat’s current 800 is fast enough and still delivers power results right in the wheelhouse of the 850s.

However, we don’t make the rules and in the history of snowmobiling it’s been proven the share of the spoils on the sales charts usually goes to the brand with the biggest engine. If Cat has bitten down on this theory and wants to establish itself as the performance leader, a 900 SDI powered 2-stroke makes sense.

It may turn out to be fairly economical, too… there may be no need to recast a whole new design. There’s a possibility that by increasing the bore and stroke of the current SDI 800, Cat could get the displacement up closer to 900ccs – say 870 or so – enough to brand the engine as a 900 and ring the bell with dealers and consumers alike without spending millions on a completely new engine. Note: The original 900 twin was an 862cc engine – and nobody argued about its sub-900 displacement).

By using current 800 technology and expanding it a bit, maybe with the use of a vibe-reducing counter-balancer, Cat could market a sled with perhaps more sizzle than the competition – an interesting possibility when you shine the spotlight on Cat’s ability to build trend-setting powerful engines.

Kent Lester
Kent Lester is Co-Publisher of SUPERTRAX Magazine and a regular contributor to this website.
Previous articleWHY A LONGER TRACK?
Next articleLinQ URBAN BAG