WHERE CAN SKI-DOO GO NEXT? 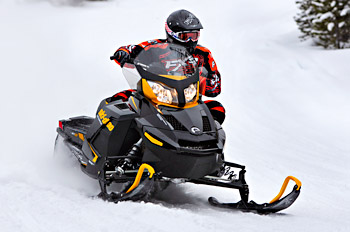 One question we keep getting asked is this: “Will MY2015 bring major changes to Ski-Doo’s line-up?”

When a company is in such a strong leadership position in any industry, it’s difficult to think about rocking the boat and going too far away from what is already bringing success. Such is the case with Ski-Doo.

Although the intro of the REV-XS platform a couple of seasons ago was not a blockbuster, the refined bodywork and ergonomic improvements have been welcomed and sales have continued to dominate.

All indications are this new engine is a sales hit and has scratched an itch in the marketplace no one else knew was there.

Frankly, we doubt the next couple of years will see much change to the still-fresh XS chassis.

Ski-Doo has done the right thing and added its sensational rMotion skid to almost every model segment and tMotion to its fleet of mountain sleds. So where will change come from?

You’ve read how Supertrax has been beating the drum about a re-do (re-doo?) of its 1170cc 4-TEC 4-stroke. We think if there’s any new direction change coming from Ski-Doo it will certainly involve a re-powering of this engine.

Not just a few Ski-Doo high performance riders have been asking for a 150-plus-hp 4-stroke and this is the ideal engine to amp up the horsepower wars.

Using three throttle bodies and a different exhaust on this mill may coincide with a bodywork freshening of the REV-XR platform – now about two years overdue for a new look.

Beyond this, we’re kinda short on new ideas for Ski-doo. The company’s stuff is just plain good – and it’s tough to beat that!

Kent Lester
Kent Lester is Co-Publisher of SUPERTRAX Magazine and a regular contributor to this website.
Previous articleWHAT WILL THE 2015 APEX LOOK LIKE?
Next articleHow About A Lighter Apex?