How About A Lighter Apex? 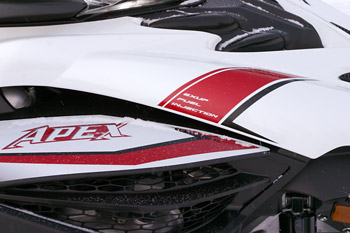 We stirred things up recently when we made a few guesses on what Yamaha’s next Apex would be like.

We guessed there were possibly two ways to go. First, the next Apex could become a turbocharged Viper using Yamaha’s 1049cc triple in the existing ProCross-style bodywork.

This would be the cheapest and fastest way to deliver a super-performance sled in the 175-plus range that would fulfill expectations for both Yamaha’s Apex hounds and Arctic Cat’s established Turbo market.

However, we really think there’s much more to be gained for both companies using the existing 162-hp Apex 4-banger in a variation of the Viper platform.

We’ve done the math and we think this sled, even with new bulkhead tweaks, EXUP installed and some new plastic, could come in at less than 530 lbs., dry weight, without EPS. That’s about 65-lbs less, give or take, than the existing Apex! Add EPS and it would still be over 40-lbs lighter.

We’ve had a chance to put some miles on the Viper using the 1049cc triple and the combo of a Yamaha engine and a Cat-based chassis is absolutely fabulous.

Once Yamaha fans get a taste of this sled-engine combo there’s going to be no turning back!

We think the faithful are going to be asking, begging, pleading for a new Apex very soon.

We can’t imagine what the Apex’s current 4-stroke four would be like in this chassis – but the lightness thing would make it one fantastic ride, wouldn’t it?

Kent Lester
Kent Lester is Co-Publisher of SUPERTRAX Magazine and a regular contributor to this website.
Previous articleWHERE CAN SKI-DOO GO NEXT?
Next articleEARLY-SEASON CROSSOVER IMPRESSIONS