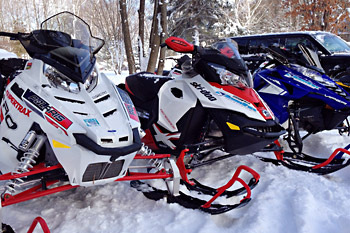 Last week we rode three crossover sleds about a hundred miles on frozen lakes, freshly covered in deep, dry snow and trails and came up with some interesting feedback.

First, (and you’re gonna hate this) we loved all three of these sleds! Yes, there were some nitpicks, such as: the Viper SE’s low windshield is the coldest, most uncomfortable wind-shoveling device we’ve ever experienced.

The Rennie, without the extra carbide on its skis, is a bit darty in semi-loose trail snow.

The Switchback, although it had the warmest windshield does direct a lot of cold air onto the rider’s lower body – needs some wind deflectors like the Adventure.

We won’t say anything about power because these sleds are not broken in yet, but we will say this: In most trail and even deep powder lake situations (we were riding on about 14-inches of dry powder – trails were semi-packed down but not groomed) the Viper affords itself very well against these two 800 2-strokes – only reluctantly giving up anything to them at the extreme big end.

It was a blast riding these three on lakes. We stopped in the deep stuff a few times to see how they would climb out and they performed incredibly well.

The Ski-Doo, with its 16-wide track, was awesome in these situations but we were also really impressed with how well the Vipe behaved in deep powder dead starts despite its heavier 4-stroke.

We wouldn’t be afraid to take these three anywhere.

Kent Lester
Kent Lester is Co-Publisher of SUPERTRAX Magazine and a regular contributor to this website.
Previous articleHow About A Lighter Apex?
Next articleTEAM ARCTIC TRIUMPHANT AT USXC OPENER