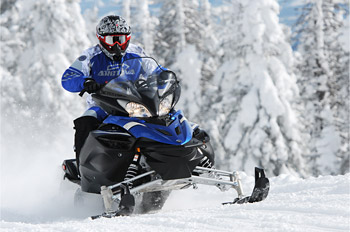 Yamaha’s oldest platform, the Apex, may be in for a rebirth soon.

Although there were major changes to the Apex’s engine (a boost from 150-hp to 162) a few years ago, the rider forward version of the Apex chassis is a throwback to the original RX-1 – a sled introduced over a decade ago.

Sales are still strong on Yamaha’s flagship, however and it may be one model on the company’s renovation list no one is asking to be changed.

We think a new version based on the Cat-Yama alliance could be in the works, though – perhaps as soon as the 2015 model year.

There are a couple of ways this deal could go: First, a turbocharger could simply be added to the Viper to boost power into the 175-pony zone. This would provide continuance for Arctic Cat in its already well-established Turbo market (9000 Series) besides creating a pretty exciting high-output Yamaha to fill the current Apex’s shoes.

The main problem is the challenge of shoehorning a turbocharger and all of its related plumbing into the current Viper with its rear-exiting exhaust engine layout.

About the only place a turbo could be situated is under the seat – not entirely out of range, and completely do-able, BTW.

The other route would be to take the Apex’s current 4-cylinder engine and squeeze (and we do mean squeeze) it into the Viper engine bay.

This may entail a complete re-do of the Viper’s bulkhead and a wider overstructure, plus new bodywork to accommodate the dimensionally bigger 4-banger. The result would be uber-cool and thoroughly Yamaha.

One important thing to remember about the agreement Cat and Yamaha share is this: The combined resources for research, development and production of new stuff are doubled because the two companies are sharing much technology. What seemed like a huge expense for model changes is suddenly cut in half.

Maybe radical change for both sled-makers is more attainable than it’s ever been.

Kent Lester
Kent Lester is Co-Publisher of SUPERTRAX Magazine and a regular contributor to this website.
Previous articleFOX Dominates at Snocross Season Opener
Next articleWHERE CAN SKI-DOO GO NEXT?