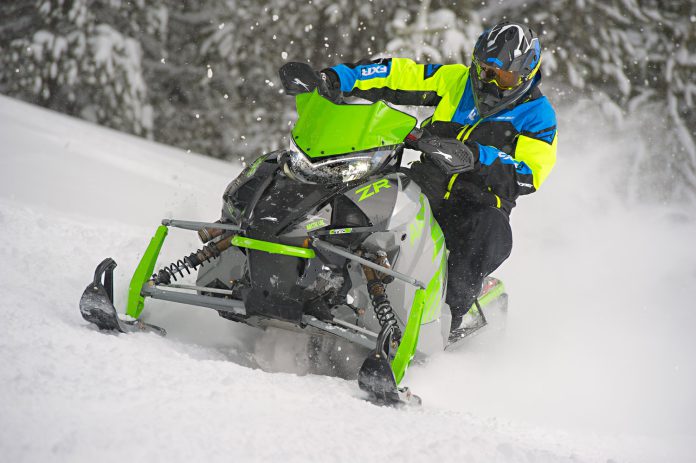 The engine is very similar in design to the DSI 600, which, by the way, has been a huge success both from a performance and a reliability standpoint.

The engine the new DSI 800 replaces, the old Suzuki-built twin, was a bastion of durability and was perhaps, the most reliable 800 2-stroke in the business over its lifespan. Although there’s no reason to think the new engine will be less reliable, it does have to prove itself in the marketplace over time.

It let you know it was a serious high performance powerplant, and was kinda fat off engagement and at throttle tip-in. The new one is smooth and linear in its power delivery all the way from engagement to full shift. It’s actually sneaky the way it spools its power – no muss, no fuss – it just gets the job done.

The big question: Is it faster? Based on our month with a prototype last year, we would definitely say it is. However, it’s faster where you notice it most – and that is at lower RPM and mid-range.

Up top, we’re not sure there’s a lot of difference (the old 800 was always pretty fast when wound out) but when you tap the throttle at about 4000 RPM, the DSI just jumps.

In this range and slower, the engine is crisp in its power delivery – much like a Polaris 800 – and the tach keeps climbing with no flat spots as warp speeds approach.

We think this engine will be great in the mountains or in powder because of its immediate and very responsive power delivery in the bottom half of its power curve.

What we don’t know is if it is any better on fuel than the old Suzook 800. Hey, I’ll bet you don’t even care that much. You didn’t buy an 800 to brag about fuel economy, did you!

Kent Lester
Kent Lester is Co-Publisher of SUPERTRAX Magazine and a regular contributor to this website.
Previous articleC&A Pro Xtreme Performance Trail Ski
Next articleSUPERTRAX TEAM WITH THE INTREPID SNOWMOBILER