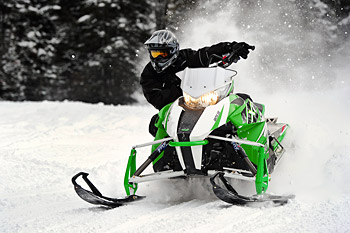 We’ve already speculated a lot about Arctic Cat’s move to use US-designed and built 2-strokes in its new sleds.

It’s not much of a secret really and Cat has been very forthcoming about its break from Suzuki beginning this model year.

Pretty exciting stuff, and a move that has the potential to drastically change the image and model line-up of its sleds.

Frankly, if Cat does nothing else other than introduce a new series of powerplants this year, it would be a huge undertaking.

This is a company that loves headlines and isn’t afraid to take big chances, though, and we think Arctic Cat may have more up its sleeve than just new engines this year.

Despite the extra manufacturing expense and complexity of building the Twin Spar chassis, Cat continues to offer it in some of its model line-up.

The much lighter, less difficult-to-assemble ProCross seems like a natural home for Arctic Cat’s TZ touring sleds, its 500-class trail sled (if it continues offering it) and, most importantly, its entry-level 570 fan. Cat really needs to build some enthusiasm at the bottom of its model selection and get customers pumped up about lower cost rides that deliver more excitement and sizzle.

The ProCross platform is the perfect foundation for sleds like this and its focus on handling, light weight and great ergonomics makes it a sure bet for success.

Depending on how the available engine choices line up for 2014 (Cat may still continue offering some of its older mills this year), we think a line of lower cost, lower powered ProCross models targeted at the late model, used sled buyer may be on the way.

No question it just makes sense for Cat to build more sleds based on the Procross!