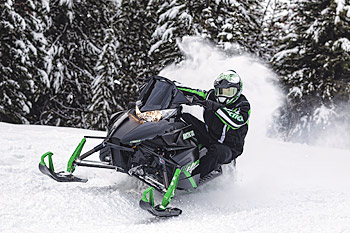 This is a big – spell it in capitals – BIG YEAR for Arctic Cat. Read on and try not to drool!

The engine is a liquid cooled, case reed inducted 2-stroke using servo-actuated exhaust valves and oil injection from an electronic “steeper” motor mounted in the oil reservoir – a key feature in the engines ability to produce less exhaust smoke.

The DSI system employs one injector mounted low on the cylinder wall (not inside the boost port) spraying fuel at about 50 psi into the crankcase at lower RPM, light throttle settings. The fuel charge is then scavenged up the transfers and into the combustion chamber.

There is no fuel introduced at the throttle bodies, they only flow air. There is some injector oil, however, that flows through the fuel injectors.

The twist with AC’s DSI comes from a slit in the piston skirt aligned perfectly with the cylinder wall mounted injector.

As RPM climbs and throttle openings increase, the injector continues to spray fuel directly through the slot in the now rising piston. A significant amount of this fuel is aimed (naturally) at the top end rod bearing.

As a result of a small amount of oil being fed continuously into the fuel rail, lubrication is deposited directly on the piston pin bearing – providing much needed lubrication that’s been elusive in both DI and SDI systems.

The fuel is always injected under the piston so the transfers scavenge both fuel and air. There is oil injected via the throttle bodies as well as onto the PTO bearings.

At this writing we have no hands-on experience with the system. However, Arctic Cat engineers in attendance at January’s Sneak Peek unveil showed us pistons with 6000 miles on them and they looked shockingly good.

Also (engineers are always honest to a fault), claims from the engine guys were exciting. Consistent high-teens mpg and power they matter-of-factly claimed “can handle the competition” was part of their test data.

Handling the competition means they believe they have both the E-TEC Rotax 600 DI and the Cleanfire Polaris 600 SDI covered.

Kent Lester
Previous articleWHAT’S ARCTIC CAT UP TO FOR 2014?
Next articleIS POLARIS GIVING UP ON 4-STROKES?