WHAT THE MANUFACTURERS REALLY THINK OF TURBOS 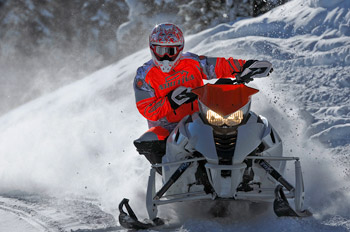 It looks like our readers and viewers have a real love affair going with turbocharged engines.

Every time we do a post that guesses at the highest performance sleds we think the manufacturers should come with, we get huge responses that they should “just put a turbo on it”. Interesting.

The fact is, Arctic Cat, Polaris and to a lesser degree, Yamaha, have been able to produce incredible results with turbocharged snowmobile engines.

These engines were used in the old ZR chassis, the Twin Spar and now in the ProCross. There have been thousands sold.

Thus, the market for turbo-sleds has been firmly established and it’s a proven fact there are considerable numbers of buyers who would purchase a snowmobile with a turbo on it.

The question is: Do the OEMs think it’s worth it? From a manufacturer’s perspective there are some serious considerations.

1. Turbocharging and its associated hardware adds considerable weight – enough that it can change the handling personality of a sled. The R&D costs to get these things right can be considerable.

2. Warranty. A TBC adds more liability and more complexity for the OEM to guarantee. Since turbo buyers tend to like to use the power they’ve been bestowed with (a lot), these engines are more prone to failure.

3. It’s riskier than just taking any engine and adding a turbo to it. These engines have to be thoroughly field tested to ensure their bearings, cranks, rods and pistons are strong enough to handle varying levels of boost over long periods of ownership. Not all engines are turbo-friendly.

4. Cost. At the minimum, a turbo adds about $1,200 to the price of a sled. Will an increase of 30-horsepower warrant the extra cost and will there be enough people willing to pay it? Surprisingly, the OEMs tell us the profit margins are actually higher on sleds without turbos and some of the extra cost is actually underwritten by the OEM to satisfy that particular market.

5. At some performance levels, a naturally aspirated engine can deliver power close to or equal to a turboed one, at less cost, with less liability and with less weight.