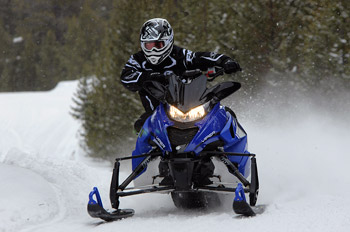 We seem to get the most response when we speculate about Yamaha and Cat’s plans for MY2015 – especially when we talk about the Apex and the Cat Turbo. Here’s a wild stabbing guess about what we could see happening.

Both Yamaha and Cat have invested heavily in building their individual maximum performance image based on two very different but established sleds.

Cat has built and perfected its Turbo for several years now and with dealers selling out of these specialized sleds every year, we don’t thing the boys in Thief River Falls are going to walk away from it.

Likewise, the Apex continues to be one of Yamaha’s top sellers and its unique reputation for performance and durability has become legendary. There are herds of customers who swear by both these models and would go to the grave defending their prowess.

Here’s what we see as a possibility: We think there may be two new sleds – completely different but totally individualized for each company.

One would be a Procross variant with a Yamaha monoshock skid and the Apex 162-hp 4-banger under the hood. This sled would only be available from Yamaha.

The other would be a new 9000 Series Cat with the 1049cc triple and a turbocharger – only available to Cat customers.

From a marketing perspective, this makes a lot of sense. It does not negate either company’s individuality at the very top of its model line-up, nor does it delete all the hard work done over a decade to establish two very specialized markets.

We think, despite the success of the Yamaha-Cat arrangement this year, Yamaha simply does not want to give up its individuality by offering all models in its product line as carbon copies of what comes out of TRF. Just sayin’.

Kent Lester
Kent Lester is Co-Publisher of SUPERTRAX Magazine and a regular contributor to this website.
Previous articleYamaha Racers Post Strong Results in Hayward
Next articleDoes Polaris Have a New 4-stroke?